Indian cricket team skipper Virat Kohli’s Rs 100-crore endorsement deal with sportswear manufacturer Puma a week ago would have made Rod Tidwell holler out to his agent Jerry Maguire: “SHOW ME THE MONEY”. Rod and Jerry – the characters played by Cuba Gooding Jr and Tom Cruise in the 1996 Hollywood flick Jerry Maguire – typify the relationship between Kohli and his agent Bunty Sajdeh. “But, to be fair to Virat, he never asked me to show the money,” guffaws Sajdeh, the CEO of athlete management firm Cornerstone Sport, and the man behind the landmark deal.

“Virat deserves it every bit… He has grown to a level where he can pull it off nicely, like other international athletes,” says Sajdeh.

But why did Sajdeh and Kohli choose Puma over Adidas or other international sports brands? There is an interesting anecdote to that. Between 2013 and 2016, Kohli endorsed Adidas, Puma’s biggest competitor in emerging markets. As part of their contract, he would do adverts and billboards for ‘Adi’ (Adidas’ nickname). Sajdeh had bigger plans for Kohli and Adidas when the contract was up for renewal in October 2016. “One year prior to the contract’s renewal, I requested people at Adidas to start a signature line with Kohli. I met them over nine times to work out a bigger engagement mandate for my star athlete,” says Sajdeh.

But folks at Adidas went back and forth, never offering a whole-hearted commitment to Sajdeh’s proposal. Sajdeh then started dialling his other corporate clients.

“Just about 10-15% of mainstream Indian brands can afford Virat Kohli as their brand ambassador,” says Sajdeh, adding, “We had corporates coming to us with requests of a brand-level engagement, but we were not sure about the profile fit.” This was when Sajdeh decided to call up his contacts at Puma. After initial discussions, officials at Puma reported back with one condition: “We’ll take Virat Kohli, but please don’t force us into a bidding war for him.”

“I assured them there won’t be any bidding war… The contract was drawn out immediately thereafter and the deal was completed in two months,” Sajdeh says.

The nascent but competitive Indian athlete management industry wrinkled its nose when it heard about the deal on the grapevine. Some said Adidas Originals, one of Adidas’ numerous product lines, is bigger than the whole of Puma. “We went with Puma because it gave my athlete better brand engagement…,” says Sajdeh.

“Secondly, Virat is a cricketer and Puma is a brand that manufactures cricket gear. Puma sells more than their competitors in India… and Puma also has licensing contracts with mega-brands like Mercedes, Ferrari, Red Bull and BMW,” says Sajdeh.

Whatever detractors may say, the Puma-Kohli deal has put Sajdeh and his company Cornerstone, in the limelight. 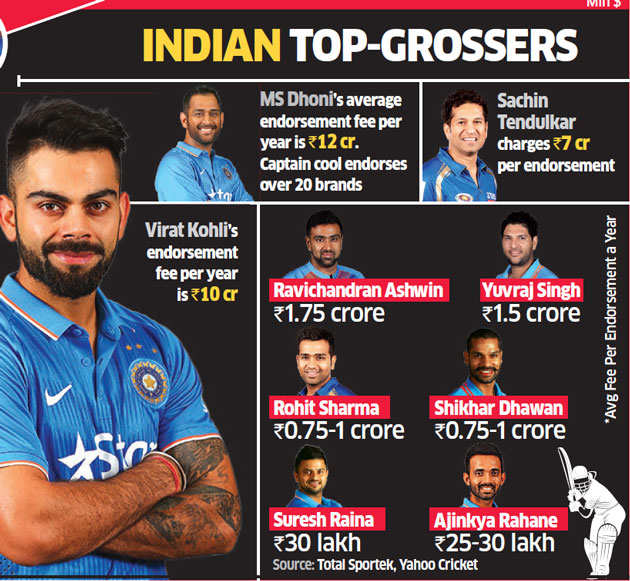 “When we sign a new athlete, we draw up a contract… But our relationship with the athlete goes beyond that contract. The relationship is far more important than the paper we make them sign,” says Sajdeh. “I don’t accompany stars when they’re playing… that’s the time I meet corporates who may want to use my athletes for brand engagement. That’s when I get business for them,” he says.

The athlete management industry in India revolves around managing the off-field engagement of star athletes. Athlete managers like Sajdeh also claim to have “ironed their clothes, packed suitcases for them and driven them around when not playing.” but, their endeavour is to transform the athlete into a saleable brand. “Athletes do get swayed from their on-field goals once they start getting money, fame, girls and fast cars. We try to keep them grounded… keep them focussed on their on-field goals,” says Sajdeh.

Being able to stay on course (to achieve their onfield goals) is what differentiates players like Kohli and Rahane from other Indian athletes. Sajdeh refuses to give names of “sporting talents” who did not make it big on the endorsement circuit, but one would not be really off-mark making wild guesses (on current or former cricket players). “Virat is a big brand name because he excels on-field… he also has a great persona off-field, being outspoken, wearing fashionable clothes (only earthy colours), wears his heart on the sleeve… That’s how good athletes become great brands,” he explains.

The endorsement market in India is mostly driven by Bollywood stars; mega brands focusing on youth opt for two ambassadors — one Bollywood star and a cricketer. Sportspersons who are noncricketers may not get a lot of endorsement deals; they have to be content with commentary assignments, TV talk shows, speaking assignments and digital content syndication. Players like Sunil Chhetri appear as pre-match TV commentator; he also takes up speaking assignments.

But athletes rarely understand the dynamics of sports management. Almost all of them who sign up with celebrity managers “wish to be a David Beckham overnight.” Take the case of this Delhi cricketer who asked Sajdeh: “Buntybhai endorsement assignment kab se milenge.” Many of them excel in their sport, but they do not have the persona — or the ambition — to make it big off field. A Mumbai pacer, with good looks and great conversation skills, is happy with his limited media engagement. “He’s not interested to be a brand or make lots of money. Such guys are sorted in life (in a good way),” says Sajdeh.

“You’ve to be the voice of the youth to become an icon… An introverted but highly-talented athlete will have fans but never a crazy fan following. For that, you’ve to be an extrovert – be seen around and be heard,” he adds.

It was Yuvraj Singh and Sushmita Sen who cajoled Sajdeh to start his own celebrity management firm. The 39-year-old, mostly dressed in black or white round necks, is often called “Jerry” by his most precious athlete – Virat Kohli.

But akin to the reel-life Jerry Maguire, Sajdeh does not keep a goldfish bowl on his desk. He, it appears, prefers to lie spreadeagled on his sofa lounger and make the calls.