NEW DELHI: India may give banks an incentive of up to Rs 10 for each transaction to encourage merchants to adopt digital modes of payment, helping achieve the objective of a less-cash economy that makes tax evasion easier to detect.

According to a government official, the proposal is to provide an incentive of 0.25% on the value of a transaction – capped at Rs 10 – made on the biometric-based payment system Aadhaar Pay and UPI platform BHIM.

The incentive is also aimed at encouraging banks to onboard merchants for the new payments ecosystem and build the requisite infrastructure.

The move would also help recoup potential loss of revenue to lenders when buyers use Aadhaar Pay or BHIM instead of debit or credit. 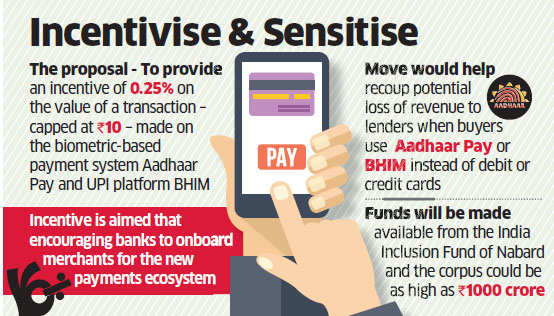 Funds will be made available from the India Inclusion Fund of Nabard and the corpus could be as high as Rs 1000 crore, according to an official.

Deliberations are now on, involving the ministry of electronics and IT and the department of financial services. The Cabinet Secretariat will soon decide on the proposal.

“The committee of secretaries had said that if they (banks) don’t have incentives, they may not go and acquire merchants, so let them have incentives, and merchant will not bear cost and it may be borne from the financial inclusion fund,” the official told ET.

After the impending launch of Aadhaar Pay by banks, including the State Bank of India, the government is also considering a merchant version of the BHIM app that is currently functional for only person to person transactions.

A senior finance ministry official said that although there is no loss of merchant discount rate (MDR) for banks on settlement through BHIM or Aadhaar Pay as they are network agnostic, the plan is intended to promote payments through these.

“The idea is that merchants should move on to these modules and customers should have a choice,” he added.

The amount to support this may come from the budgetary allocation of Rs 3,000 crore to promote financial inclusion activities. Finance Minister Arun Jaitley had announced in the Union Budget that 20 lakh Aadhaar Pay Point of Sale (PoS) machines will be deployed by banks in the current financial year.

Prime Minister Narendra Modi announced on December 30 that Aadhaar Pay would be launched soon and that it would revolutionise the payment ecosystem. Aadhaar Pay will be introduced in the country first with five banks, including Syndicate Bank, IndusInd Bank, and IDFC Bank. Bank of Baroda and Punjab National Bank are also in the process of launching it at the earliest.

“It’s a new paradigm, a quantum leap for banks. They are yet to harness the full potential of even credit and debit cards, so some initial issues are bound to come up while moving to a new system,” said another government official, explaining the delay behind the launch of Aadhaar Pay.

“The government therefore is trying to handhold the banks on technical issues, and is also looking at whether banks can be subsidized by the government along with some rationalization of charges,” added the official.