It’s been evident for quite some time now that Reliance Jio Infocomm Ltd’s plans are big and bold. After all, it has committed an investment of Rs2.5 trillion ($37 billion) in an industry that generates revenues of around Rs1.8 trillion currently. And thanks to its “rock-bottom pricing”, to use its own words, analysts expect the industry’s size to contract to around Rs1.6 trillion in fiscal 2017-18 (FY18).

But if Jio is to be believed, this will be but a temporary blip. In a presentation to analysts, it said it expects industry revenues to rise to Rs3 trillion in fiscal 2020-21 (FY21). Can industry revenues nearly double in just three years, especially in the backdrop of the hypercompetition that Jio has unleashed? Jio’s presentation itself gives a glimpse of the dogfight that lies ahead—it expects a 50% share of the market by 2021.

And therein lies the biggest challenge for Jio’s grand vision. How can intense price competition and high revenue growth go hand in hand? 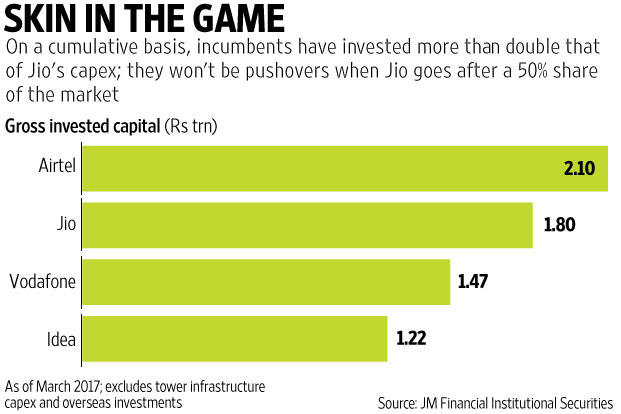 The three large incumbents—Airtel Ltd, Vodafone India Ltd and Idea Cellular Ltd—are no pushovers. Their investment in the mobile business is Rs4.8 trillion and counting. They have already lowered tariffs substantially to try and protect their subscriber base. Jio, however, seems to be foreseeing a placid competitive environment, considering that it expects data tariffs to increase meaningfully from its current pricing levels. Its revenue target estimates data realizations of Rs50 per GB, while its current tariff prices data at around Rs10 per GB.

Jio told analysts that it expects the effective yield on its data services to be around Rs30 per GB, keeping in mind usage is typically lower than prescribed limits.

Analysts at Kotak Institutional Equities point out in a note to clients, “We see Jio’s industry size assumption and revenue market share target as a (nearly) impossible duo. Jio gunning for a 50% share would mean brutal dogfights for market share, leading to a downward spiral in pricing, which would mean we do not get to Rs50/GB pricing and hence the industry fails to hit Rs3-3.6 trillion in revenues.” 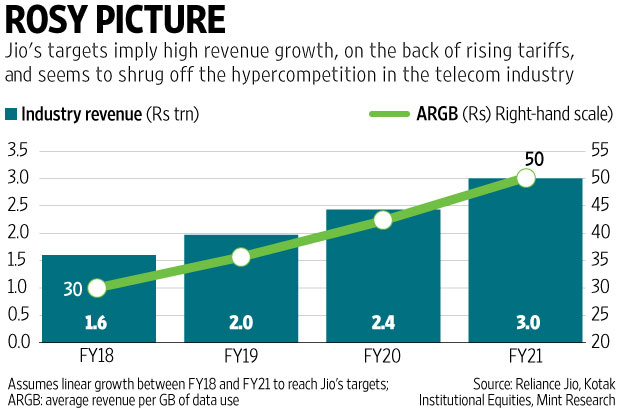 Jio also expects average revenue per user (Arpu) to more than double from current levels of Rs133 to Rs313 in FY21. To be fair, it does make some good arguments why this is feasible.

According to its estimates, based on Trai (Telecom Regulatory Authority of India) and CMR (CyberMedia Research) data, smartphone users generate an effective Arpu of Rs330 and feature phone users an Arpu of Rs172 currently.

Reported figures look much lower because of the use of multiple SIMs by some users. Jio rightly points out that this is because of the price arbitrage that is possible with incumbents’ myriad plans. With free voice and roaming, it expects this arbitrage to be eliminated and the number of SIM cards to drop by around 30% to 800 million.

Still, by expecting Arpu to increase as much, it seems to be underestimating incumbents’ ability to use pricing as a lever and protect share. In any case, assuming that the current effective subscriber base is 800 million (adjusting for dual/multiple SIM cards), the current Arpu stands at Rs188, which is about 40% lower than Jio’s estimated Arpu for the industry in 2021.

Kotak’s analysts say, “We fail to see how an industry, that has historically spoilt its customers and created a ‘wireless services are deflationary by default’ consumer mindset, overcomes this mindset barrier.” Ironically, even though Jio in its presentation bats for higher Arpus, after years of declines, its inaugural tariff structure strongly reinforces the above-mentioned ‘wireless services are deflationary’ mindset.

What about volume assumptions? At face value, they look the grandest, although in reality they may be far more achievable. Paid data consumption in India is currently around 2 billion GB annually, with per subscriber usage less than 1GB per month. Jio expects data volumes of around 60 billion GB in FY21 and per subscriber usage of 6.25 GB per month. With telcos now increasing data limits substantially, this target doesn’t look unreasonable. “We do not see these numbers as unrealistic even as we do think these are at the border of the optimistic zone,” Kotak’s analysts say in the note.

From incumbents’ and their investors’ point of view, the heartening factor in Jio’s recipe for success includes a gradual increase in tariffs. But how it expects to grab a 50% share of the market while raising tariffs is a conundrum.

Shares of Reliance Industries Ltd, Jio’s parent company, are nevertheless on a roll. Since it announced its tariff structure about two weeks ago, its market capitalisation has risen by around $11 billion. Who knows, investors seem to be thinking, Jio might just pull off the impossible, or maybe come close to doing so.