Radhakishan S. Damani is well-known as an ace investor and, in his second innings, as the founder of the profitable D-Mart supermarket chain, run by Avenue Supermarts Ltd. This combination of Damani’s investment prowess and D-Mart’s financial performance makes this initial public offer (IPO) a sought-after one. He is not selling in this offer and, with the promoters holding an 82% post-IPO stake, will continue to play a significant role in D-Mart’s evolution as a national retail chain, although day-to-day management is with the professionals.

In a sector where profit margins are ridiculously thin, D-Mart adopted a different business model. It follows an ownership or long-lease model for its stores. That means a higher capital investment but zero or lower and stable rental costs. It focuses on residential areas and stays away from high-street locations to keep costs down. Offering low prices to the consumer on a daily basis ensures customers keep coming back. It started local, expanded within a state and then to adjoining states, and is now looking to go national. Maharashtra and Gujarat contributed 77% of its revenue in the nine months ended December 2016 (9MFY17). 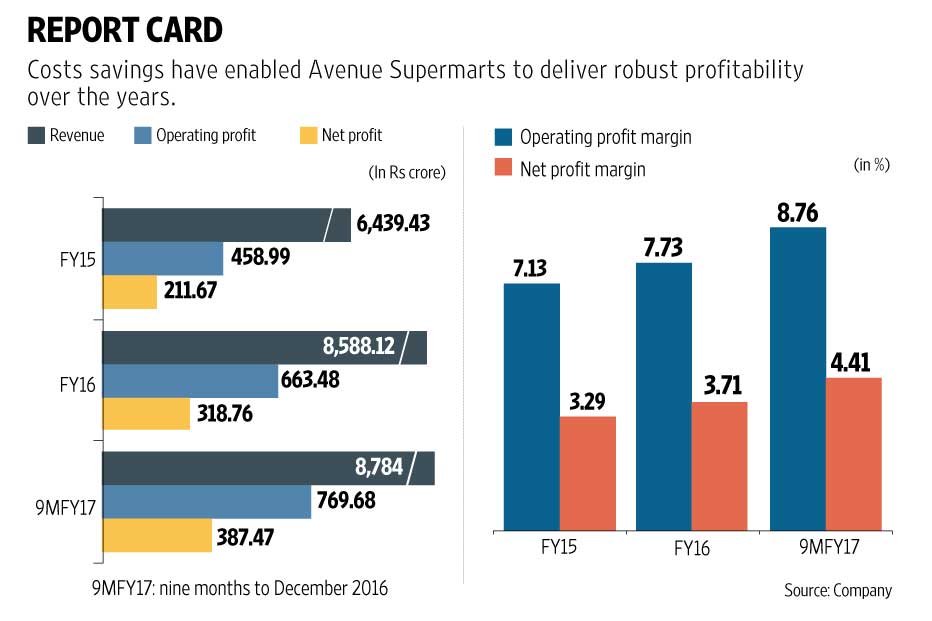 Lower staff costs as a percentage of revenue help, too. No wonder D-Mart makes comparatively better operating profit margins despite lower gross margin than its peers. It has followed a cluster-based expansion approach that helps keep a check on distribution costs.

As of 31 December, it had 117 stores across 3.57 million sq. ft. Store additions are relatively slower this year so far. For perspective: D-Mart had added 14 stores and 21 stores in FY15 and FY16, respectively. For 9MFY17, it added seven stores. Like for like (LFL) growth for FY15 and FY16 has been over 20%, which is impressive. In D-Mart’s case, LFL is revenue growth from sales of stores which have been operational for at least 24 months at the end of a fiscal.

Accordingly, revenue growth for FY16 and FY15 was 33% and 37%, respectively, year-on-year. That is lower than the annual revenue growth seen in the preceding two years. Store additions and whether the company manages to sustain its LFL and revenue growth will be a crucial factor to follow in the days to come. Prabhudas Lilladher Pvt. Ltd says D-Mart would be adding 15 stores with an area addition of ~0.5mn sq. ft every year.

Why does it need the money? D-Mart is raising Rs1,870 crore through this issue and will use Rs1,080 crore to repay debt over the next three years, and Rs367 crore will be spent on opening new stores and the rest for corporate purposes.

What about valuations? If one annualizes D-Mart’s nine-month net profit, we get 62% growth for FY17. But this includes the one-time benefit from demonetization and it would be better to assume growth at 50%, the same as fiscal 2016. At the upper end of the Rs295-299 per share, D-Mart’s post-issue implied a market capitalization is Rs18,660 crore, and this translates to a price-to-earnings ratio of 39. In comparison, competitor Future Retail trades at a price-to-earnings ratio of 36 based on Morgan Stanley’s earnings per share estimates for fiscal 2017.

But D-Mart’s superior financials should give it a premium over other retailers. Its operating profit margins and net margin in the nine months to December were 8.8% and 4.4%, versus Future Retail’s 3.2% and 2%, respectively. Further, D-Mart’s return on capital employed (RoCE) for 9MFY17 was 22.9%. Now, peg that against 12.8% Morgan Stanley estimates for Future Retail for fiscal 2017. Also, note that Future Retail has nearly doubled since 30 December, up 97%, leading to an expansion in its valuation multiples.

D-Mart’s net profit margins should also get a fillip from the debt repayment plan. Once it repays debt, its debt-to-equity ratio is likely to be negligible. That should result in considerable interest cost savings. That the D-Mart IPO is going to find many takers is no secret. Its valuations, however, mean there is little room for error on execution. This room could get even narrower if the stock lists at a much higher price. Its ability to deliver on revenue growth, while maintaining profitability as it goes national, is what will determine how the stock does from its post-listing levels. If you share Damani’s long-term investing philosophy, then you may be game for the ride.