New Delhi: The top five US tech companies—Google, Amazon, Facebook, Microsoft and IBM—invested in 420 private companies during 2012-16, according to a new research by CB Insights. Top of the heap was Google (Alphabet), which backed 333 start-ups through its various venture arms. The vast majority of Google’s investments came through Google Ventures (GV), which backed 294 start-ups throughout the five-year period, while the company also made strategic plays through its growth equity fund Google Capital.

According to the study, start-up investments by the five biggest US tech companies spiked in 2016, as these companies stepped up activity. Notably, in May 2016, Microsoft officially launched a new fund, Microsoft Ventures. Amazon also ramped up activity with its Alexa Fund, a voice interface-focused fund launched in 2015. Google, meanwhile, slowed its investment activity in 2016, but still remained the top private market investor among the five biggest tech companies. 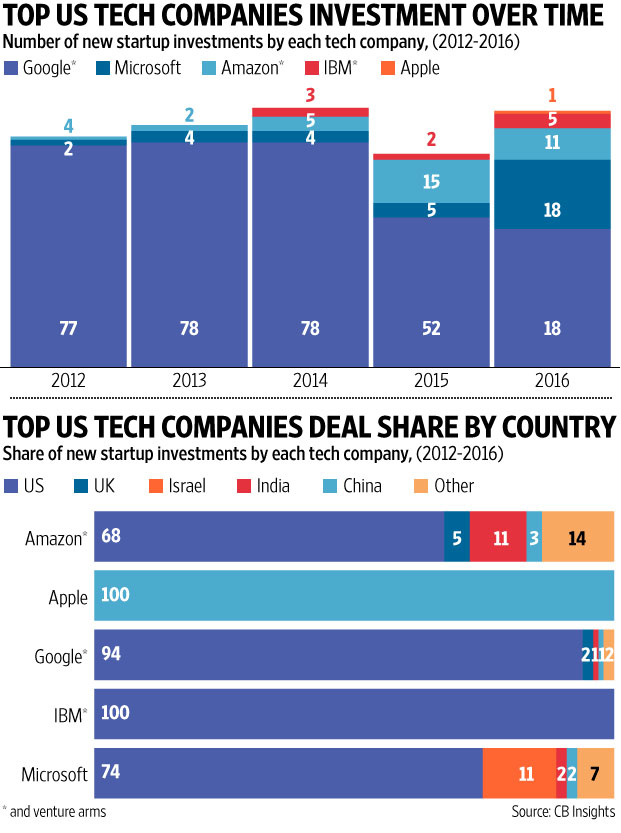 How the top 5 invested

While GV makes far more investments, Google has participated directly in larger deals. In particular, Google participated in a $1billion Series D round to aerospace company SpaceX in 2015, and a $542 million Series B funding round to augmented reality start-up Magic Leap in 2014. GV’s largest deal was Uber’s $258 million Series C round in 2013.

Microsoft, at second spot, invested in 39 start-ups over the same time period. It nearly doubled the size of its portfolio in 2016, when Microsoft launched Microsoft Ventures and used it to invest in 19 companies. According to the company, it plans for Microsoft Ventures to focus on companies that can “complement and leverage the transition to the cloud”, and its investments so far include start-ups such as business analytics start-up Paxata and enterprise communication platform Dynamic Signal. Microsoft also reorganized its accelerator program in 2016, and forged relationships with a large number of start-ups under the new Microsoft Accelerator. (Microsoft’s accelerator activity is not included in this analysis).

Amazon launched a new fund in 2015, the Alexa Fund, to invest up to $100 million in companies focused on voice control technology. The Alexa Fund backed 18 start-ups since launch, ranging from smart home start-ups to wearables start-ups . In addition, since 2012, Amazon itself has invested in 19 start-ups.

In comparison, IBM’s investment activity has been low, with just three investments in 2014, two in 2015 (both through IBM Watson) and five in 2016. Apple, which has made dozens of acquisitions since 2012, made just one disclosed equity investment. However, it was a big one—a $1 billion investment into China’s Uber competitor Didi Chuxing.

Amazon’s investments have been most geographically diverse

Out of the top US tech companies, Amazon has made the greatest proportion of investments in non-US start-ups, thanks to a number of deals in India, Canada and the UK, since 2012. In fact, the largest deal Amazon participated in since 2012 was the $120 million Series B to Thalmic Labs, a Canadian start-up into wearables.

Comparatively, nearly three-quarters of Microsoft’s portfolio is US-based, as is 94% of Google’s portfolio and 100% of IBM’s. Apple’s one equity investment since 2012 was to Didi Chuxing.