Gross domestic product (GDP) for the third quarter (Q3) of financial year 2016-17 (FY17) grew at 7 per cent, allaying fears of any major effect of demonetisation though it was the lowest expansion in four quarters.
Private final consumption expenditure, denoting demand, rose at double the rate (10 per cent) in Q3, against five per cent in Q2.
The Q3 numbers not only made India the fastest-growing large economy in the world but also helped the Central Statistics Office (CSO) retain its earlier projection (in first advance estimates) for full-year GDP growth at 7.1 per cent in the second advance estimates released on Tuesday.

CSO stuck to its projection despite the fact that GDP growth for 2015-16 was revised to 7.9 per cent from earlier 7.6 per cent after release of the first advance data. Investment continued to show weakness for the entire financial year even though it was shown to rise against contraction in earlier data. First advance estimates did not take into account the impact of demonetisation, while the second one factored it in terms of latest available data.

The higher-than-expected growth in the third quarter was driven primarily by manufacturing, agriculture and government-boosted expenditure.
According to data released on Tuesday by CSO, Q3FY17 GDP growth was only slightly less than 7.4 per cent in the July-September period despite demonetisation. The growth of Q2 was revised upwards by 0.1 percentage point.

Prime Minister Narendra Modi had announced demonetisation of old series Rs 1,000 and Rs 500 notes on November 8, leading to severe cash crunch in e economy. Economists and analysts had expected this to adversely affect growth, some even predicting it to be below 6 per cent in the third quarter.

“It appears like the negative impact of demonetisation was over-estimated. India still maintains a 7-per cent growth rate and remains one of the brightest spots in the global economy,” Economic Affairs Secretary Shaktikanta Das told Business Standard after data was released.

However, there was some impact of demonetisation. For instance, in the first advance estimates GVA was projected to be 7 per cent for 2016-17. Due to higher indirect taxes, net of subsidies, GDP growth came at 7.1 per cent in the second advance estimate as well.

Chief Statistician T C A Anant said, “Lower GVA has been compensated for by higher taxes and lower subsidies.”

He said the numbers announced on Tuesday only took into account data available currently. “Impact of policies such as demonetisation is difficult to assess without a lot of data.”

For third quarter, State Bank of India group Chief Economic Advisor Soumya Kanti Ghosh attributed better-than-expected growth to the steep downward revision of Q3 FY16 growth to 6.9 per cent, masking the impact of demonetisation. “Even then it seems a little difficult to understand that the positive effect of downward revision in previous year is strong enough to overpower the negative effect of demonetisation in Q3FY17,” he said.

According to CSO data, manufacturing GVA for Q3 grew 8.3 per cent year-on-year, compared to 6.9 per cent in Q2.

Sunil Kumar Sinha, principal economist, India Ratings, said GDP data for the third quarter was better than the rating agency’s forecast of 6.5 per cent, as the period before demonetisation kicked — approximately half of Q3 — is likely to have made the difference. “This is the period in which both Dussehera and Diwali fell when most of the incremental consumption spending takes place,” he said. 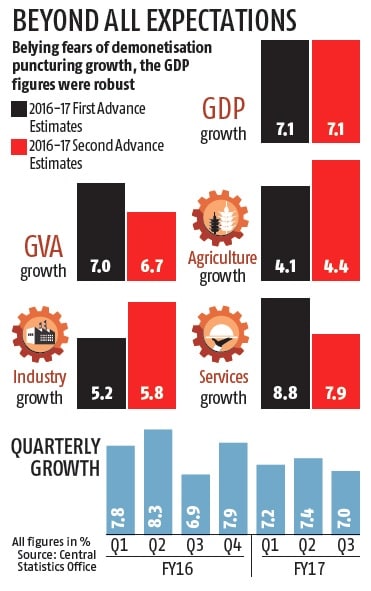