The Indian Accounting Standards (Ind AS) have prompted an interesting change in the way companies look at their assets. Following the transition to the new norms, companies’ assets have seen wide-scale revaluation, resulting in significant profit increases for the earlier quarter as companies restate those results as per the new accounting norms to compare them with the latest quarterly results.

This offers an opportunity to see how much the changes in the accounting standards have affected company financials. Moreover, the revaluation has been done in such a way that it will continue to act as a tailwind for profits in the days ahead.

Property, plant and equipment (PP&E) revaluations account for the biggest adjustments to profits under Ind AS. The total immediate profit impact of adjustments to PP&E is already worth at least Rs10,776 crore, according to a Mint analysis of recent results data from 72 large firms (from among BSE 100 companies) conducted in partnership with consulting firm KPMG.

All figures compare the September 2015 numbers under the old accounting standards with numbers calculated under the new rules.

The total absolute value of profit adjustments made (including upward and downward revisions) was Rs19,500 crore. PP&E adjustments accounted for Rs10,776 crore or 55.26% of the changes. The equivalent adjustment made for the June quarter was a negative adjustment of Rs68.35 crore.

Sai Venkateshwaran, partner and head of accounting advisory services at KPMG in India, said some companies that had written down their assets in the September 2015 quarter under the old accounting norms have revalued these assets to their fair values on transition to Ind AS. This has led to a reversal of some of the earlier write-downs in the September 2015 quarter, which has improved the profits for that quarter when restated under the new norms.

“The write-down of depreciable assets by some of these companies could have a significant, continuing positive impact on their profits in the days ahead,” he said.

What do these changes mean on the ground?

Consider a firm that had total PP&E worth Rs1 lakh. The land was earlier valued at Rs25,000 and the rest of the factory worth Rs75,000. Suppose that when the company revalues it, a higher value is assigned to the land (say Rs60,000) and a lower amount to the rest (Rs40,000 in our example). The non-land portion sees lower depreciation because of this revaluation. Assigning a higher value to land, and a lower value to other assets increases profits because of this lower depreciation. Land is not depreciated.

The result of these adjustments was seen in profit gains when September 2015 results were declared. 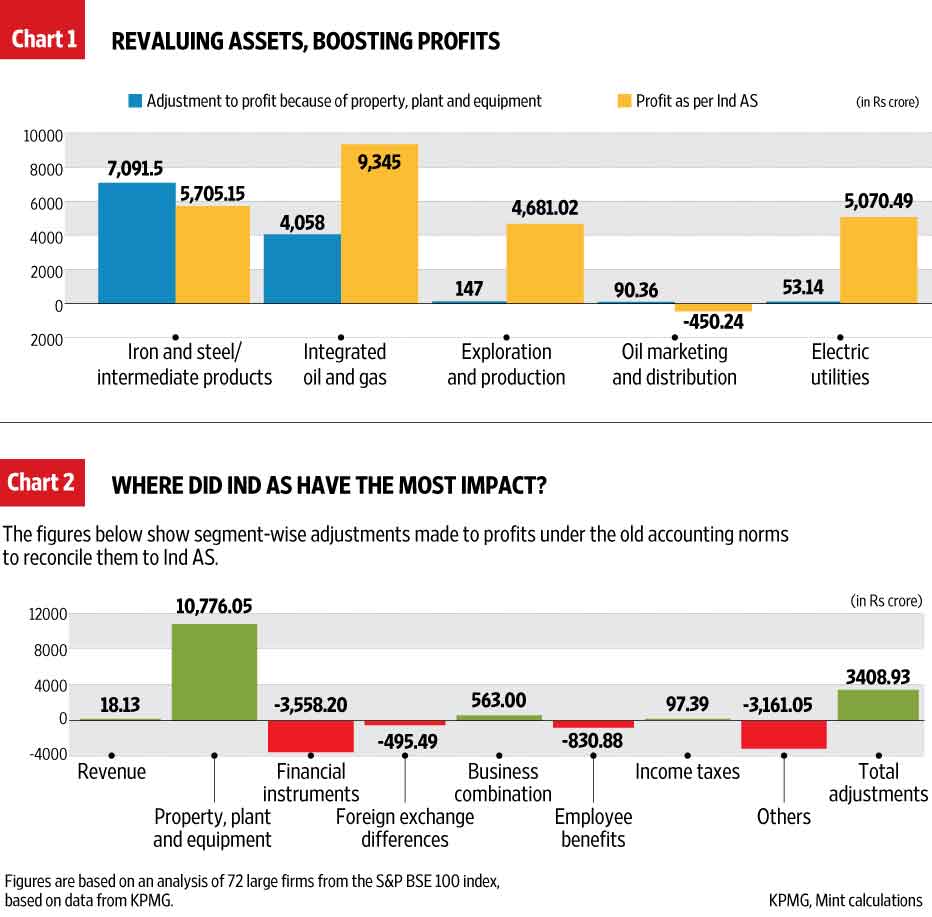 The iron and steel companies saw their profits more than triple to Rs5,705 crore under the new norms. This makes the sector one of the key gainers profit-wise because of net adjustments under the new norms (Rs3,801 crore). Another gainer is the integrated oil and gas segment, which saw profits rise by Rs2,625 crore to Rs9,345 crore.

Deepak Jasani, head of retail research at HDFC Securities Ltd, said a number of firms have had to mark down their fixed assets—PP&E— against reserves, because the new regulations require these assets to be valued at a level which correctly reflects their remaining useful life. This would have had a negative impact on their net worth, which would have adverse implications for firms carrying high debt.

“These companies probably looked at old value land on their books and revalued it upwards by crediting their reserves to markup their net worth,” he said.

Independent market analyst Anand Tandon said, “The accounting standard allows revaluation, so some of this is inevitable. You have to assume that companies will report as per their convenience.”

Tata Steel did not respond to email, text and telephonic requests for comment.

RIL said it had to revise certain assets downwards to abide by the new regulations. At the same time, it revised its land assets upwards and also the impairment of exploration and production assets because of the change in rules.

The new accounting standards negatively impacted sectors such as commercial vehicles, and breweries and distilleries too.

“Land which had been acquired over the decades and held at its historical acquisition cost, has been revalued upwards to reflect its fair value on the balance sheet without causing any impact on reported earnings,” said an RIL spokesperson.

In case of exploration and production assets, the new norms said they should be accounted for using the “successful efforts” method instead of using full costs, leading to a reversal in impairment taken, the spokesperson added (see Chart 2).

This is in spite of Ebitda (earnings before interest, taxes, depreciation and amortization) dropping 3.72%. The overall Ebitda figure dropped to Rs1.32 trillion on account of the transition to the new accounting standards.

Other factors including lower taxes also helped result in higher after-tax profits. This year is the first in which companies are following the new norms.

• The value of these adjustments is already in excess of Rs10,000 crore, shows the latest quarterly comparison.

• A look into the changes show that they are the outcome of balance-sheet adjustments made after the new accounting standards came into effect.

• Experts says many companies have had to revise some assets downwards because of stringent new norms.This would have affected net worth of already indebted companies.

• So, some have chosen to revise land value upwards to preserve net worth, resulting in the changes seen. This in turn is reflected in the latest disclosed financials.

• An analysis of financials shows that land has been given higher value and other assets are valued lower. This will lower depreciation and increase profit numbers in the days ahead as well.