Describing the participation of the contingent of 179 UAE soldiers as ‘historic’, Gulf News quoted Shaikh Mohammad in a series of tweets in which he hailed the long-standing relationship “based on mutual respect and common interests” between India and UAE. Calling it both historic and a proud moment for the Emirati state, Gulf News also highlighted the fact that UAE was the first Arab country to march on Republic Day.

“It was a proud moment for the UAE and the Arab world, with its troops comprising a mix from the army, navy and air force leading the parade. The UAE contingent was led by Brigadier Obaid Al Zahumi, while Major-General Rajesh Sahai was the second in command from the Indian side. The UAE contingent’s march was as impressive as the melodious tune of Kaptien that its band played along, prompting dozens of delighted members of the UAE delegation to rush for pictures of the historic moment. The march of the UAE contingent also met with huge applause from the crowd,” Gulf News reported.

“While the UAE is the second country after France to send its troops to participate in the Indian Republic Day parade, they became the first Arab troops to march on Rajpath, the historic boulevard that connects the Rashtrapati Bhavan (presidential palace) to the iconic India Gate at the heart of the Indian capital,” they added.

Gulf News’ coverage also stressed on the highlights of the parade; from BSF’s Camel Contingent to the various “visual delights” of tableaux of the states and also ones showcasing several government initiatives.

Gulf News also said that despite the heavy rain and long queues, the crowd “enjoyed every moment of the carnival atmosphere”.

Among other newspapers, the Khaleej Times called the event a historic step towards deepening India-UAE ties. 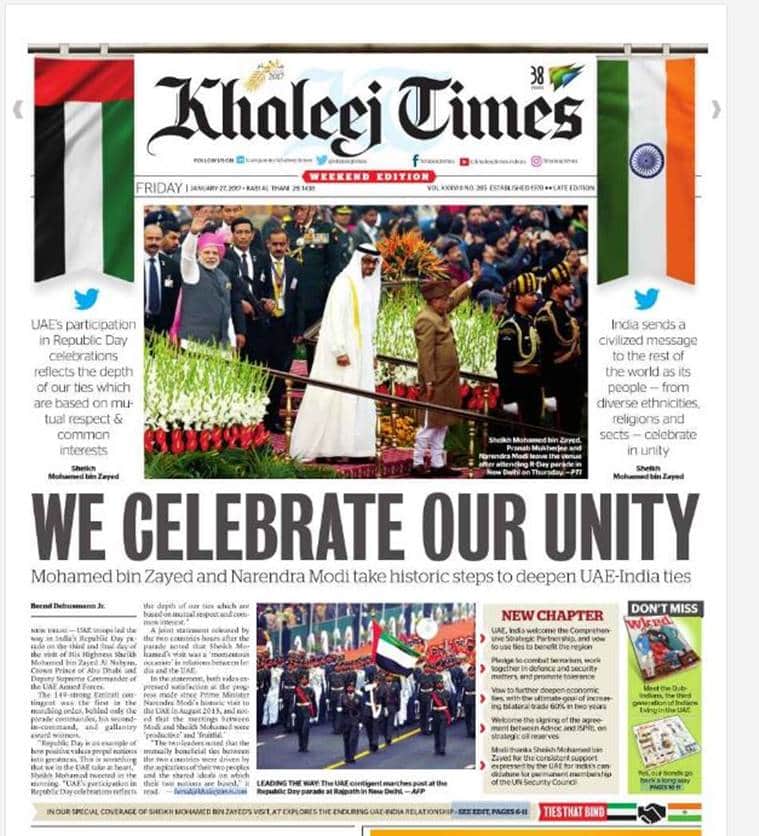 The Khaleej Times also highlighted the agreements between India and UAE in the various fields to “strengthen strategic partnership”. In its front page coverage, the Khaleej Times showcased how both the countries pledged “to combat terrorism, work together in defence and security matters, and promote tolerance”.

The prominent UAE newspaper also highlighted the strengthening of economic ties between the two countries, underlining the 60 per cent increase in bilateral trade in the next two years. 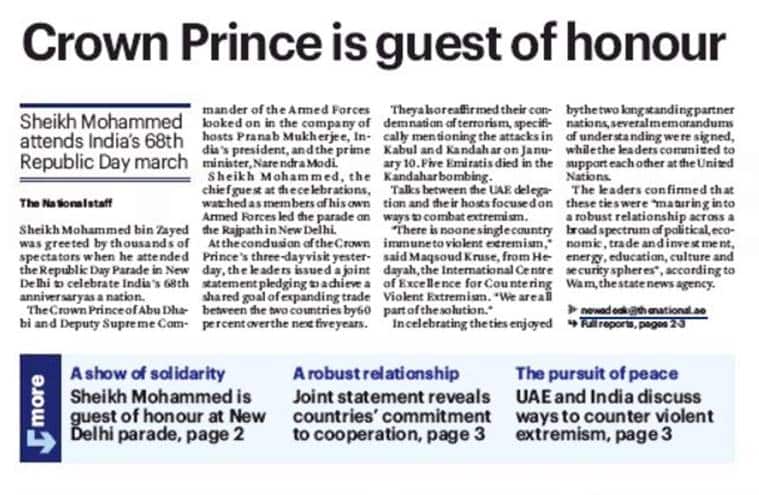 Another UAE-based newspaper, The National, provided similar coverage as well, highlighting the several events of the parade. The newspaper also dedicated two pages which highlighted the other aspects of Sheikh Mohammed bin Zayed Al Nahyan’s visit to India. It looked into the various fields of cooperation between India and UAE such as strategy, extremism, economy and trade.

ABOUT US
businessfortnight is a is a multi-platform publisher of news and information, which includes www.businessfortnight.com www.hindi.businessfortnight.com and www.healthfortnight.com It provides trusted business, financial, healthcare, national, and international news to professionals.
Contact us: [email protected]
FOLLOW US
© Copyrights 2012-2020: All Rights Reserved with BusinessFortNight. Managed by Fulcrum Services
Social Media Auto Publish Powered By : XYZScripts.com
View Mobile Site