The country’s largest FMCG company — Hindustan Unilever (HUL) — saw sales volume fall by four per cent for the December quarter. However, an equivalent increase in realisation (that is, price-led growth was four per cent for the quarter) ensured the impact on revenue (net sales plus other operating income) was marginal, falling 0.7 per cent to Rs 7,706 crore versus Rs 7,764 crore a year ago.

If net sales (Rs 7,512 crore) is taken into account, then the year-on-year (YoY) decline was higher at 1.2 per cent for the quarter under review, pointing to the stress the firm was under during the “demon quarter”, say sector analysts.

Earnings before interest, tax, depreciation and amortisation, or Ebitda, at Rs 1,355 crore, was down five per cent, with margin down 70 basis points, the company said in a presentation. The company’s profit after tax (before exceptional items), at Rs 920 crore, was also down 10 per cent YoY. Weakness in revenues as well as margins pulled down HUL’s net profit before exceptional items, though after taking into account one-off items net profit increased 6.8 per cent YoY to Rs 1,038 crore.

While these numbers were largely in line with Street estimates, Sanjiv Mehta, managing director & chief executive officer, HUL, said it was a challenging period, as there were both “pipeline and offtake issues”. 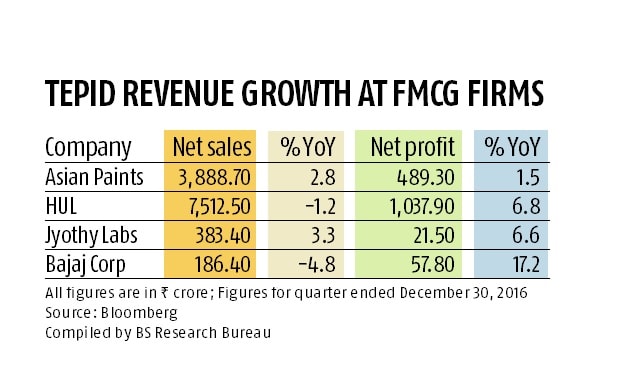 “August, September and October were better than July and the market was recovering from the slowdown it was seeing earlier, thanks to a good monsoon and salary hikes initiated by the government. Demonetisation, however, did halt growth temporarily during the December quarter,” Mehta admitted, adding that his firm was still trying to ascertain how long the pain would last.

Pipeline issues, Mehta said, would correct by the first quarter of the next financial year (FY18), indicating indirectly that the pain in FMCG would last another quarter at least.

The stress, he said, was the most in the central parts of India, with the south and west recovering first followed by the east and some parts of the north. “Urban was also better than rural (in terms of sales growth) and within urban, it was modern trade that did better than general trade,” he said.

The picture incidentally was no different for Asian Paints, the country’s largest decorative paints company.

The same went for consumer goods companies Jyothy Laboratories and Bajaj Corp that last week posted a 3.3 per cent increase and decline of 4.8 per cent, respectively, in consolidated net sales. Net profit, on the other hand, grew 6.6 per cent for Jyothy Laboratories, though Bajaj Corp was better off, reporting a net profit growth of 17.2 per cent for the December 2016 quarter.

While this is only the initial set of results coming out of FMCG, more are expected in the next few weeks, including ITC and Colgate-Palmolive, among others.

The world’s largest consumer goods company Procter & Gamble (P&G) has already indicated last week that its weak sales growth for the October-December quarter was on account of the note ban in India.