The broad reading is that gas companies’ results for the December quarter are likely to be relatively weak.

City gas distributors—Indraprastha Gas Ltd (IGL) and Mahanagar Gas Ltd (MGL)— had delivered a good financial performance for the half year ended September. But both companies are expected to suffer the adverse consequences of demonetization on compressed natural gas (CNG) demand during the December quarter. As a result, there could be some negative impact on CNG volume growth. Further, reduced traffic during high smog days in the quarter is also expected to weigh on IGL’s results.

According to Edelweiss Securities Ltd, IGL’s Ebitda margin will be squeezed, given the increase in spot/term LNG (liquefied natural gas) price, while realization has been cut following the 18% reduction in domestic gas price. For MGL, “we are estimating Ebitda/standard cu. m (scm) to contract 12% quarter-on-quarter (q-o-q) to Rs6/scm,” said Edelweiss Securities in its results preview.

Ebitda is earnings before interest, taxes, depreciation and amortization. 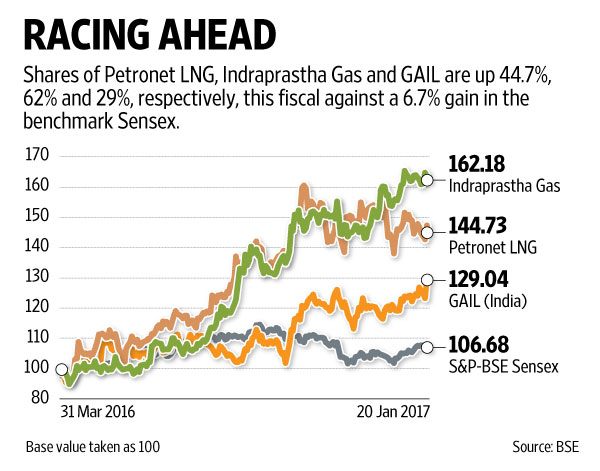 The results of Petronet LNG Ltd, too, are likely to be comparatively subdued, after a fabulous performance in the first half of FY17. For one, spot LNG prices increased sharply during the December quarter, compared with the September quarter. And, then, LNG demand was below expectations. Citi Research expects lower utilization for Petronet LNG on the back of lower volumes (lower October and November imports on higher spot prices + competition from the Dabhol LNG terminal), driving a 16% q-o-q Ebitda decline.

Meanwhile, volume offtake for GAIL (India) Ltd’s petrochemicals segment is expected to be adversely impacted due to demonetization. But the good news is earnings improvement is expected to sustain. GAIL’s earnings have been improving steadily since bottoming out in 1HFY16 and analysts at Jefferies India Pvt. Ltd expect the trend to continue with a 5% q-o-q increase in Ebitda. For the stock, investors will do well to follow the ramp-up of GAIL’s expanded petrochemical capacity at Pata in Uttar Pradesh.

But investors have little to complain. After all, these stocks have performed well so far this fiscal. Stocks of Petronet LNG, IGL and GAIL have increased 44.7%, 62% and 29%, respectively. That compares favourably with the 6.7% gain in the benchmark Sensex during the same time frame. MGL’s share price has doubled from its issue price of Rs421 a share. Even as that augurs well, valuations seem to be capturing a good chunk of the optimism. Petronet LNG, IGL, MGL and GAIL trade at 15.3, 18.3, 19.7 and 12.5 times, respectively, estimated earnings for fiscal 2018.