Crossing the Rs8,000 crore- mark in stand-alone net profit for the first time is a milestone for Reliance Industries Ltd (RIL) indeed, but it would have been sweeter if other income had not played a crucial part in it. The December quarter’s (Q3) net profit was Rs8,022 crore, higher than what many analysts had expected. But other income rose by a third from a year ago to Rs3,025 crore, boosting profit growth to a good extent.

In fact, the refining business was expected to perform well thanks to a better refining operating environment, as the Singapore gross refining margin (GRM) had improved sequentially. Sure, the company’s GRM improved to $10.8 a barrel from $10.1 a barrel in the September quarter but fell short of the expectations of many analysts. For instance, Kotak Institutional Equities and Nomura Research were expecting the measure at $11.3 a barrel and $11.5 a barrel, respectively. RIL’s premium over benchmark Singapore GRM at $4.1 per barrel is also the lowest in the past three quarters. 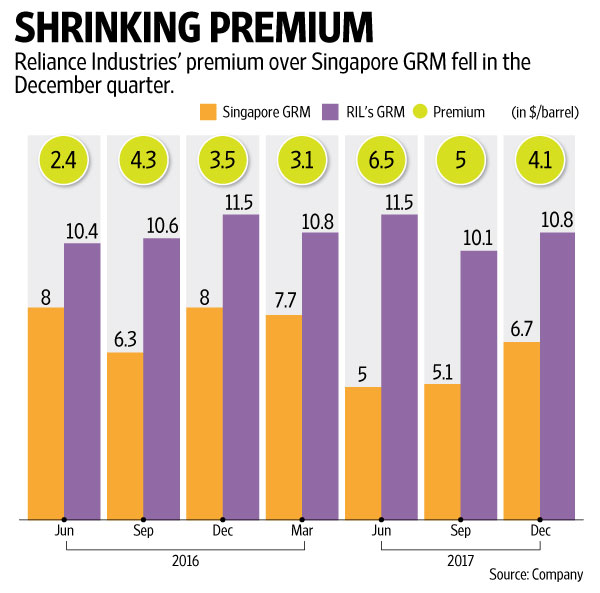 Even as the petrochemicals business performed well with its Ebit (earnings before interest and tax) increasing 30% from a year earlier, the fact that RIL’s key business segment hasn’t performed as expected is disappointing. Refining business’ Ebit accounted for almost two-thirds of the company’s total Ebit in the quarter. The domestic oil and gas business posted a loss at the Ebit level, due to lower price realizations and lower volumes. The organized retail business has performed well but the segment is relatively small to have a meaningful overall impact.

What of the stock? The RIL stock has underperformed the benchmark Sensex index so far this fiscal year. But it’s worth noting that the share price has appreciated about 16% from its closing low of Rs930 seen on 23 May 2016. Currently, one RIL share trades at 11 times estimated earnings for the next fiscal year. The refining environment continues to remain strong but is already known to investors and may not be enough to override their other concerns.

RIL’s outstanding debt has increased to Rs1,94,381 crore as on 31 December from Rs1,89,132 crore as on 30 September. During the same time frame, cash and cash equivalents declined to Rs76,339 crore from Rs82,533 crore. That could be a concern, according to independent analyst S.P. Tulsian, who said, “I believe this is mostly on account of increase in telecom capex, a business from which there is no clarity on revenue or Ebitda from a near-term perspective.” The market is not going to react positively due to concerns on negative cash flows and unimpressive profit growth of refining, its core and main business segment, says Tulsian. Ebitda is earnings before interest, tax, depreciation and amortization.

Of course, all eyes will be on the performance of the telecom business. The company has recently expressed confidence saying that it will prove the financial community’s scepticism wrong with Reliance Jio Infocomm Ltd’s performance. The year 2017 will see a test of this optimism as Jio turns into a paid service, said CLSA in a report on 2 January.

This year will also see stabilization of RIL’s downstream projects. “Analyst expectations of incremental Ebitda from these projects remain markedly below guidance of $3bn-3.5bn,” points out CLSA. The low expectations give room for surprise to the upside, added the report. The stock thus is likely to take cues from a combination of telecom and downstream projects’ news flow, which is where investor attention will also be focused in fiscal year 2018.