New Delhi: The richest 1% in India owns 58% of the country’s wealth, according to the latest edition of not-for-profit Oxfam International’s global inequality report, released on Monday.

While new data for China and India indicate that the poorest half of the world owns less than previously estimated, across the world, the scenario is equally grim.

“It is obscene for so much wealth to be held in the hands of so few when 1 in 10 people survive on less than $2 a day. Inequality is trapping hundreds of millions in poverty; it is fracturing our societies and undermining democracy,” said Oxfam International executive director Winnie Byanyima.

ALSO READ | World’s 8 richest men own as much wealth as half of humanity: Oxfam report

Seven out of 10 people live in a country that has seen inequality widen in the last 30 years, according to the report, titled An Economy For The 99 Percent—the latest in a series that began in 2014 and is launched just before the World Economic Forum meetings in Davos every year. 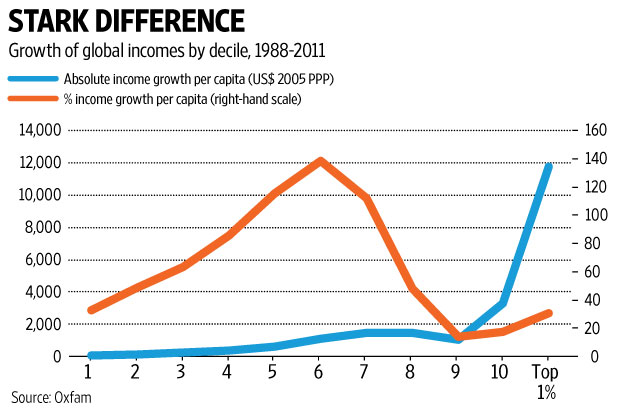 Citing recent political developments such as the election of Donald Trump in the US, the election of President Rodrigo Duterte in the Philippines and the UK’s vote to leave the European Union, the poverty-focused group suggested that extreme political polarization has been fuelled by increasing public anger against economic inequality.

It said big business and the super-rich are fuelling what it called the inequality crisis.

The report paints a grim picture of the future—just eight men currently own the same wealth as the poorest half of the world, but over the next two decades, 500 people will hand over $2.1 trillion to their heirs—a sum larger than the yearly gross domestic product (GDP) of India.

It added that while the rich are getting richer everywhere, the majority of the population globally is finding it harder each year to move out of poverty.

“Oxfam’s research has revealed that over the last 25 years, the top 1% have gained more income than the bottom 50% put together,” says the report.

The report outlined how the super-rich use a network of tax havens to avoid paying their fair share of taxes, employing an army of wealth managers to secure returns on investments that would not be available to ordinary savers.

In India, the report suggested that 57 billionaires have the same amount of wealth as the bottom 70%.

Nisha Agrawal, CEO of Oxfam India, said “the budget for 2017-18 provides a major opportunity to reverse” the increasing inequality trend in the country.

She added that the upcoming budget should attempt to put in place policies that will raise more taxes in a more progressive way, which in turn will need to be spent on basic education and healthcare to create a more equal opportunities country.

The report highlighted the need for India to increase public expenditure on health from 1% to 3% of its GDP and on education from 3% of the GDP to 6%.