Singapore: The sun’s energy is free, but the capital required to harness it must earn a fair return. Try telling that to the gung-ho bidders for India’s utility-scale solar power projects.

Auction prices will fall below Rs4 per kilowatt-hour this year, Bloomberg News reports. The record low 2016 bid was Rs4.34.

A 60% drop since 2010 is partly a result of overcapacity in Chinese-made panels. But according to some industry insiders, at 6 cents per kilowatt-hour, the Indian solar market is showing signs of being unnecessarily competitive. 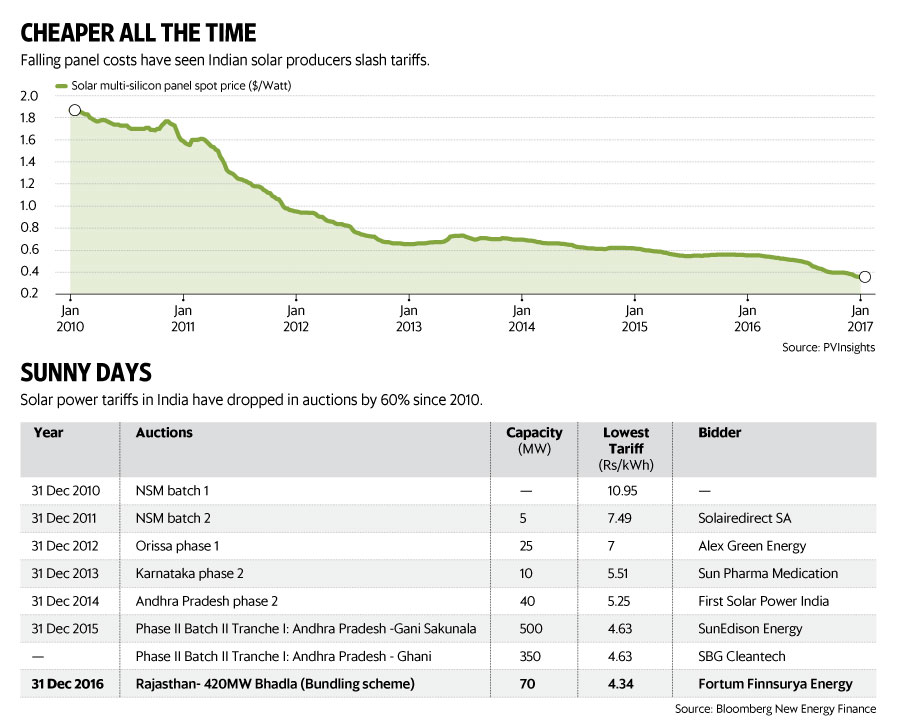 Start with panels. Multi-crystalline silicon modules will sell for around 32 US cents per watt this year, according to Jenny Chase, the chief solar analyst at Bloomberg New Energy Finance. For the financial year ending in March, India’s energy regulator had assumed a price of about 47 cents.

Those 15 cents can make a big difference. An Indian power producer able to raise capital at 10% could, in theory, earn a 40% pretax profit margin even after committing to supply power at 6 cents, according to Gadfly calculations.

So far, so good. But overoptimism is rife. The biggest leap of faith might be in assuming a stable exchange rate. This matters to foreign investors, because revenue from supplying the grid is in rupees, while their capital costs are mostly in dollars. Margins would slide to 14% if the dollar strengthened by even 3% a year against the rupee during the 25-year life of the power-supply agreement.

Hedging that risk won’t come cheap. Over the past 25 years, the greenback has appreciated at a 5% annual pace against the Indian currency. Who’s to say there won’t be a repeat?

Maybe India will wring inflation dry and power producers will find it viable to finance projects with local-currency borrowing. The cost of rupee debt for solar projects is 12%. If the average for the next 25 years were just half as much (matching the current cost of Chinese solar companies to borrow in yuan), a decent 20% margin would still be possible. That’s before tax. Assuming lower tax rates in the future, double-digit returns on equity might be in the bag.

These are upbeat assumptions, however. The Indian government toyed with the idea of letting power producers bid for dollar-denominated tariffs, letting the taxpayer take the rupee depreciation risk. But why bother taking on a risk others would happily carry for free?

The sun is shining on India. Let consumers bask for now. Investors who land solar projects for a song in future insolvency proceedings will make hay.