New Delhi: Signalling a gradual improvement in external demand conditions, India’s merchandise exports expanded for the fourth consecutive month in December by 5.72%, while a 48.5% dip in gold demand saw imports increase by 0.46% during the month.

The trade deficit in December declined to $10.4 billion from $13 billion the previous month. However, excluding gold, silver and petroleum products, imports grew 6.1%, which could mean a revival in demand in the economy if sustained.

In December, exports of gems and jewellery (27.86%), drugs and pharmaceuticals (12.49%), chemicals (18.15%), engineering goods (19.9%) and petroleum products (8.22%) picked up while shipments of readymade garments declined (-0.3%) probably as a fallout of demonetization of high-value notes by the government on 8 November. 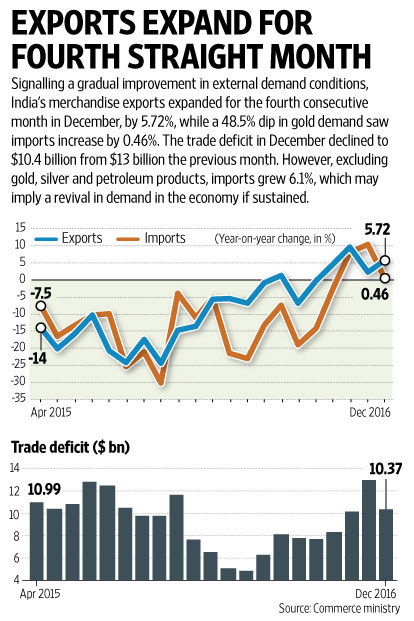 Aditi Nayar, principal economist at ICRA Ltd, said while the pickup in growth of merchandise exports in December is encouraging, the bulk of the decline in the trade deficit can be attributed to lower gold imports.

“The high growth of exports of value-added items such as engineering goods in December is a big positive. Post the note ban, the labour-intensive sectors displayed a mixed trend in December 2016, with a high growth of gems and jewellery, yarn and fabric and a mild contraction in textiles, carpets and leather items,” she added