The Union Budget for 2017-18 is very likely to lower corporate tax rates. That is not only because of the faltering economy, but also because the finance minister had promised in his 2015 budget speech that corporate tax rate will be reduced from 30% to 25% over the next four years, together with the phasing out of exemptions and deductions. The Confederation of Indian Industry (CII) has urged a reduction in the corporate tax rate to 18%. Is the industry lobby pushing its luck too far? 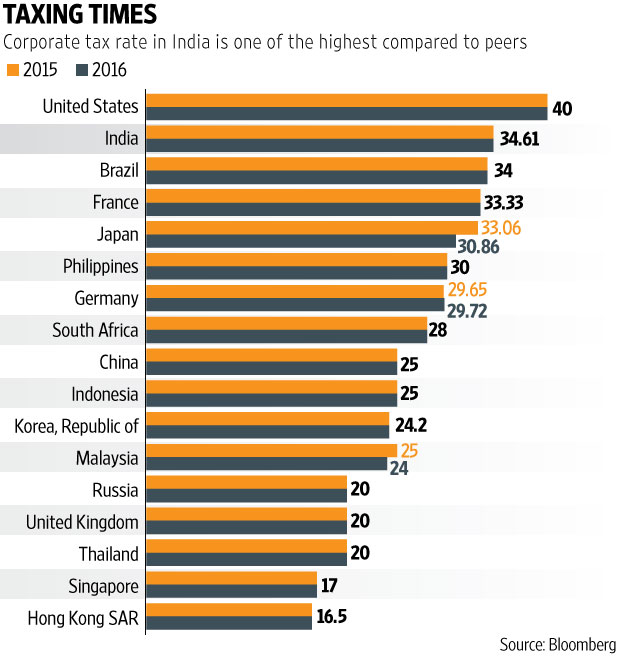 There is, however, a catch. The effective tax rate or the rate of tax actually shelled out by many companies is lower due to a slew of exemptions and tax holidays that they have been enjoying. Finance minister Arun Jaitley said in his last budget speech, “The effective collection of Corporate Tax is about 23 percent. We lose out on both counts, i.e. we are considered as having a high Corporate Tax regime but we do not get that tax due to excessive exemptions.” So if the average corporate tax rate comes down to 23% or so, after all the exemptions are taken away, that won’t be much of an improvement in the tax rate for a large chunk of the corporate sector. That is why the CII’s proposal to get the corporate tax rate down to 18% makes eminent sense.

If the prime minister is serious about making a paradigm shift in the Indian economy and improve the ease of doing business, as he said at the Vibrant Gujarat summit, he should tell his finance minister to dramatically reduce the corporate tax rate. Such a move will also enable the formal sector of the economy to expand, which the government has been saying is one of its prime objectives in its effort to get rid of the black economy. It will reduce the incentive to hide income and increase the number of decent jobs. Any revenues lost to the government should be more than made up in the long term, by the benefits it brings to the economy.