IndusInd Bank’s financial results for the third quarter do not seem to bear out the prevailing narrative that demonetisation has badly bruised the banking sector.

The private sector lender made a net profit of Rs750.64 crore for the quarter ended 31 December, an impressive 29% growth from a year ago and not entirely on the back of treasury profit.

Indeed, the management in its interaction with media and analysts, said that it did see enquiries fall in the first few weeks of demonetisation but since then disbursals have galloped. There has been no slowdown in gold loans, used-vehicle loans, commercial vehicle loans and even the much-worried-about LAP (loan against property) portfolio. 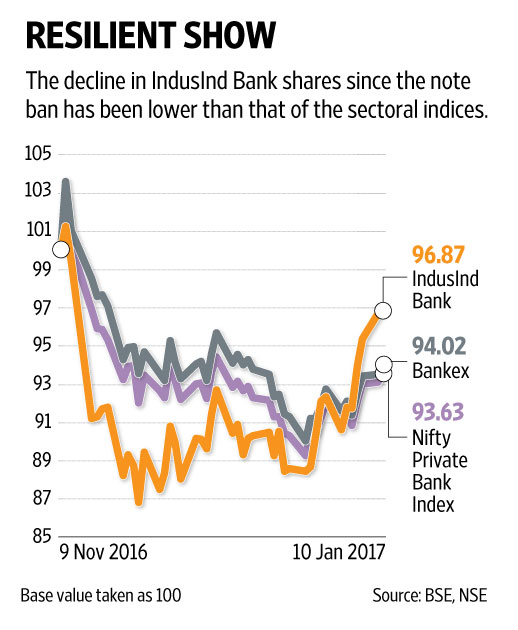 Analysts had expected the private sector lender to be hurt from demonetisation since the withdrawal of 86% of currency in circulation had literally brought business to a grinding halt. Lenders like IndusInd Bank with a large book of loans to small and medium enterprises (SMEs), commercial vehicles and LAP were expected to feel the pain more acutely as the incidence of cash transactions was high in these sectors.

The private sector lender’s loan book is tilted towards SMEs and despite a diversified credit portfolio, the bank relies heavily on vehicle finance for growth. But in the December quarter, both its corporate loan book and retail loan portfolio grew by 25%.

It is natural to wonder whether IndusInd Bank lowered its caution on quality of loans in order to grab business. While this can be determined only in the coming quarters, the bank’s asset quality held up amid the demonetisation blow. Both gross and net non-performing assets as a percentage of loans were modest and controlled. Bad loans did rise but the increase was not alarming.

Perhaps the only sign of demonetisation on the private sector lender’s balance sheet was the jump in deposits. The ratio of current and savings accounts to total deposits surged to 37% and total deposits grew by 38%.

IndusInd Bank’s shares declined over 5% since the currency purge, less than the decline in sector indices. The strong numbers of the December quarter would give legs to the rally again.

IndusInd Bank is the first lender to detail its financial performance in the thick of currency withdrawal. While the metrics should bolster investors, it would be good to note that in the past the private sector bank has been an outlier in performance