It won’t be long before Reliance Jio Infocomm Ltd’s total investment exceeds Rs 2 trillion, or around $30 billion. While Jio’s capital expenditure has always looked massive, perhaps what is not as widely appreciated is the fact that the industry’s total revenues stand at around $27 billion. To add to this, incumbents are forced to upgrade their networks to match Jio’s generous offers, and as a result, investments chasing mobile voice and data revenues have ballooned lately.

At the same time, the revenue and profit pie is shrinking. Wireless revenues of incumbents are set to fall by around 5% sequentially in the December quarter, thanks largely to Jio’s decision to offer its services free. And regardless of when it starts charging customers, peers such as Bharti Airtel Ltd have already started cutting tariffs. It is unlikely that average usage will increase substantially. As such, revenues can be expected to continue declining in the near term. 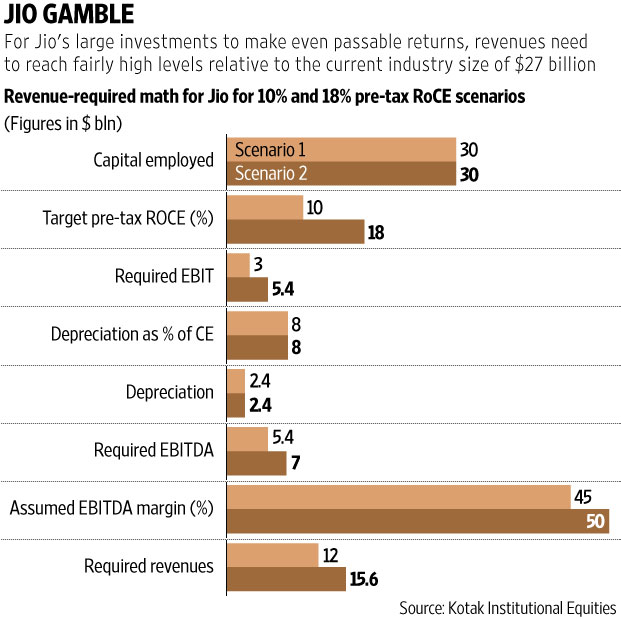 In this backdrop, what would be the assumptions under which Jio and other large telcos can generate passable returns? Analysts at Kotak Institutional Equities provide a reality check with some numbers. Assuming a pre-tax return on capital employed (RoCE) target of 10%, and depreciation at 8% of capital employed, Jio would need to generate $5.4 billion in Ebitda on its capex of $30 billion. And assuming a generous 45% Ebitda margin, Jio would need to reach revenues of $12 billion.

To generate an RoCE of 18%, as Mukesh Ambani suggested in an interview earlier, the Ebitda needed would be $7.8 billion. This would mean revenues need to be around $15.6 billion, assuming that higher revenue entails better margins of around 50%.

This can only happen if India’s telecom market expands rapidly after shrinking in financial year 2017-18. A decent 30% market share for Jio means industry size needs to be as much as $52 billion in about five years (the period involved in Kotak’s analysis). This is nearly double the current market size, and a rather unlikely scenario, given where penetration levels are already.

The other possibility is that the fierce price war results in some large casualties, leaving Jio with a 40-50% share of the market. But none of the large incumbents is even close to thinking of giving up. Bharti Airtel Ltd and Vodafone India Ltd are well funded, and the former has made rapid strides to protect its turf. Idea Cellular Ltd, although relatively less capitalised, is exploring the sale of its tower assets to raise funds.

As such, the battle for market share is expected to remain intense. Unfortunately, this will drive down tariffs as well as profits. As Kotak’s analysts write in a note to clients, value creation can happen “if one can resist the monopoly-appeal or winner-takes-all mindset.”