Mumbai: Responding to the nudge by Prime Minister Narendra Modi in his year end speech, banks rushed to lower lending rates. Led by the State Bank of India (SBI), which announced a steep 90 basis points (One basis point is one hundredth of a percentage point) reduction in its lending rates, other banks have followed with lower cuts.

But if you are thinking that you will pay almost a full percentage point less on a new home loan you are mistaken. Banks did cut lending rates, but hiked the ‘spread’ between the lending rate and the home loan rate you get, effectively reducing the transmission of the rate cut to you.

This is how it works. Your home loan rate is pegged to the lending benchmark rate which is called the marginal cost of funds based lending rate (MCLR).

The rate applicable to you is a mark up on the MCLR, according to two things. Either a flat spread between the MCLR and the rate you get or a rate that is MCLR plus some metric that builds your credit score into the formula.

For example, the State Bank of India now lends to home loan seekers at MCLR plus 60 to 65 basis points. Suppose the MCLR is 8%, then you get to borrow at 8.60% or 8.65%. Two banks have used this ‘spread’ to announce large cuts in the MCLR but then hiked the spread to reduce the overall reduction of rates. 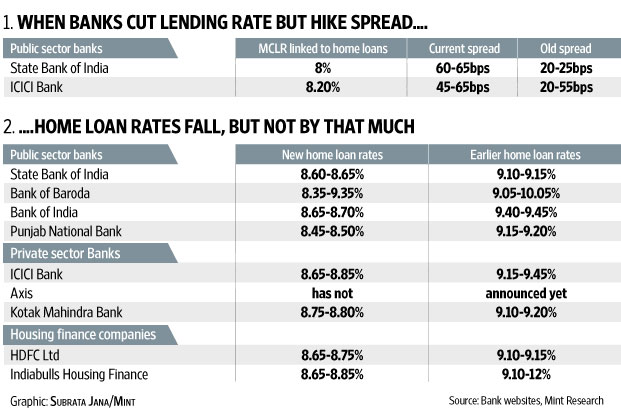 What does this mean finally for home loan borrowers? Have rates gone down? Yes, but not by that much. See Table 2. Some banks have maintained the spread and are offering home loans on MCLR rates provided the customer has a Cibil score of over 760.

“For customers who have a Cibil score of over 760 we are offering home loan at 8.35%. Earlier the home loan rates were in the range of 9.05-10.05%,” said Baburaj N.R., chief manager, retail, BoB. He further said that in case their existing base rate borrower wants to switch to the new MCLR rate, they don’t need to pay any fee to switch over. Most of the banks charge a switch over fee to move from base rate to MCLR. For instance, SBI, the country’s largest, charges a switch over fee of 0.50% on the outstanding amount subject to a maximum of Rs10,000.

As a borrower to get a clear picture on the home loan rates, don’t just look at the benchmark lending rate—in this case MCLR. Consider the spread on home loan rate and other charges such as processing fee and other administrative cost before opting for a loan.

Remember that if you have a good score you can negotiate with the bank for a lower spread. Know that once you are locked into a ‘spread’, the bank cannot change it. “In the MCLR regime, when rate are reset the spread doesn’t change,” said Jagdeep Mallareddy, executive vice-president, retail lending and payments, Axis Bank Ltd. Remember that higher spreads can at times mean higher borrowing rates.

For instance, say if your MCLR is 8% and spread is 70bps, after a year if MCLR changes to 8.5% while your spread remains constant, your effective home loan rate change will be 9.20%. However if the spread is lower, in case of a downward revision of MCLR, the lower rate transmission will be better. Go for a home loan interest rate that is closer to the MCLR rate and with a lower spread besides factoring in other costs.