New Delhi: Both indirect taxes and direct taxes levied by the Union government have registered good growth in the month of December, finance minister Arun Jaitley said on Monday, suggesting that demonetisation’s impact on economic activity has been limited.

Setting aside reports of closing of businesses and resultant job losses due to demonetisation, Jaitley said these are all anecdotal evidence but the tax collection numbers are real and not an estimation.

“Statistics and taxation figures are real. This is the money that has come in,” he said in a press conference.

As per data released by the finance ministry, indirect tax collections grew by 14.2% in December. Of this, while central excise levied at the stage of manufacturing grew 31.6% as compared to the corresponding year-ago period, service tax collections rose 12.4% and customs duty declined by 6.3% mainly on account of a fall in gold imports. 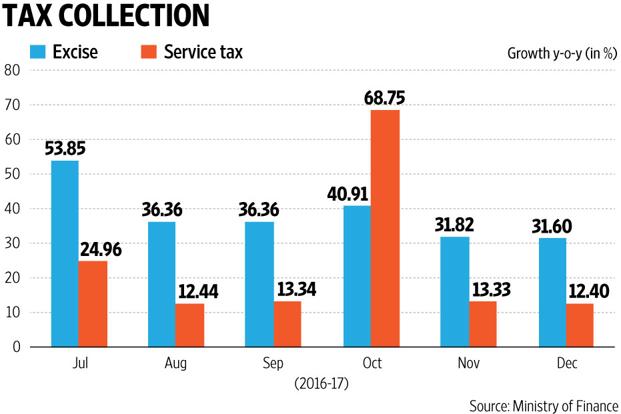 To be sure, a comparison of the monthly tax collection figures indicate that there has been a slight moderation in growth in indirect tax collections in the period of November-December.

On 8 November, Prime Minister Narendra Modi had announced the cancellation of the legal tender of old Rs500 and Rs1,000 notes with effect from 9 November. In the absence of adequate new notes in the aftermath of this announcement, there was a severe cash crunch in the economy that is said to have impacted small-scale manufacturing sectors and the informal economy in the country. Many economists and rating agencies also revised the growth numbers for the Indian economy downwards to below 7% in 2016-17 to factor in the impact of demonetisation.

Jaitley did not comment on the impact of demonetisation on the economy, saying that one should wait for actual growth numbers to come out.