Apart from sending a clear signal to NRIs and other overseas investors that they should submit themselves to the Indian court system, experts said the Friday order could threaten the merger of Aircel with Reliance Communications ( RCom).

Aircel’s licences could be transferred to a local company, auctioned off or its revenue attached. Krishnan and Maxis could technically avoid the order by appearing through lawyers and assuring the top court that they will face the charges in the lower court. Also covered by the order for evading summons are former Maxis employee Augustus Ralph Marshall and M/s South Asia Entertainment Holdings Ltd.

The case relates to former telecom minister Dayanidhi Maran allegedly coercing promoter C Sivasankaran to sell his stake in Aircel to Maxis in 2006 as part of a quid pro quo in the form of bribes. The Central Bureau of Investigation (CBI) filed a chargesheet on the matter in October 2014.

Should they appear, the four accused may well be eventually acquitted, but fear of court delays typically has overseas investors dreading the prospect of trials, experts said. Some lawyers said on condition of anonymity that bribery charges were mostly inferences based on coincidences which may not stand scrutiny in court. Friday’s order was aimed at making defendants aware of the consequences of not appearing, the apex court said. 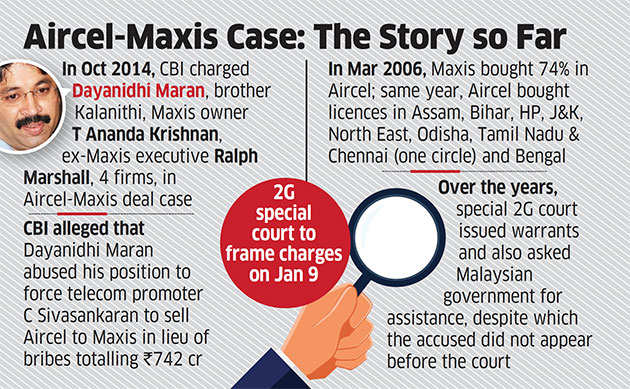 “It will be open to accused to appear before this court and make their representation in consonance with law, failing which, it is made clear… that the proposed order shall be passed,” the bench said. To this end, Chief Justice JS Khehar and justices NV Ramana and DY Chandrachud directed the Indian government to have the order published in two Malaysian dailies.

“We must have the accused before us. If he (the accused) uses the spectrum of our country, he must come here. He cannot use assets here and run away from the process of the court, we will not tolerate this,” Khehar said. The chief justice suggested the chargesheet was an allegation by a prosecuting agency that must be disproved by the accused. “This (spectrum licences) involves a lot of money which was earned as a matter of fraud (as per chargesheet). We cannot allow it to be earned if a party refuses to appear before us,” the bench said. “We cannot allow the process of law to be defeated.”

Amicus KK Venugopal said the Malaysian attorney general had rejected a request for cooperation by CBI in investigations, saying it was interference in its internal affairs. CBI has since issued letters rogatory, which require arrest warrants to be served by Interpol. This was under process, Venugopal said.

The top court also asked the Department of Telecom (DoT) to look for an alternative service provider for Aircel’s nearly 91 million subscribers. DoT could even think of auctioning the spectrum off, Khehar suggested.

Aircel and RCom didn’t respond to emailed requests seeking comment. SENTIMENT MAY BE DENTED Experts warned that if the court were to pass an order on the lines proposed, sentiment could be dented at a time when India is seeking to boost investment.

“For foreign investors, this is very bad news. The direction that this issue is taking is completely different and can have huge implications for Aircel,” said an expert who did not want to be named. Jaideep Ghosh, chief operating officer, KPMG Management Consulting, India, said, “Any disruption in the sector which is going through stressed times, will negatively impact the overall investor investment.”

Reliance Communications had announced its long-awaited merger with Aircel in September last year. This will lead to creation of the country’s fourth-largest phone company if the transaction is completed. RCom approached the Competition Commission of India for formal approval a month ago, said people with knowledge of the development. Since it involves merging RCom’s wireless business with that of Aircel, there is no transfer of assets from Aircel and no sale of spectrum to RCom, they said, adding that hence the court order will have no immediate impact.

One of them pointed out that the Supreme Court order does not cover Aircel’s 3G spectrum in 13 circles and was only focused on the 2G spectrum which Aircel has in several circles in the 1800 Mhz band. It also doesn’t cover Aircel’s liberalised 1800 MHz spectrum bought through auctions, so the overall impact could well be limited, the person said. Another senior industry executive said if licences were cancelled, only three Aircel circles could be impacted, Himachal, Assam and Odisha, as the case pertains to licences issued in 2006.