Mumbai: Banks had been expected to be among the big beneficiaries of demonetization, thanks to a flood of deposits and the resultant cut in the cost of funds. But at least in the short term, banks, too, will feel the pain no less.

The impact of the demonetization shock on corporate earnings will be felt across sectors, and will be visible as early as next week when December quarter results start trickling in.

Much of the narrative about demonetization’s impact has focused on the consumer sector, because of its cash-reliant supply chains, and real estate. However, banks suffered, too, Bloomberg data shows.

Consensus earnings per share (EPS) estimates for fiscal 2017 for the BSE Bankex index have dropped 12.9% since 8 November, when the government invalidated Rs500 and Rs1,000 currency notes. That is lower than the earnings estimate cut for BSE Realty (down 39.63%), but higher than that for industrials and automobiles. 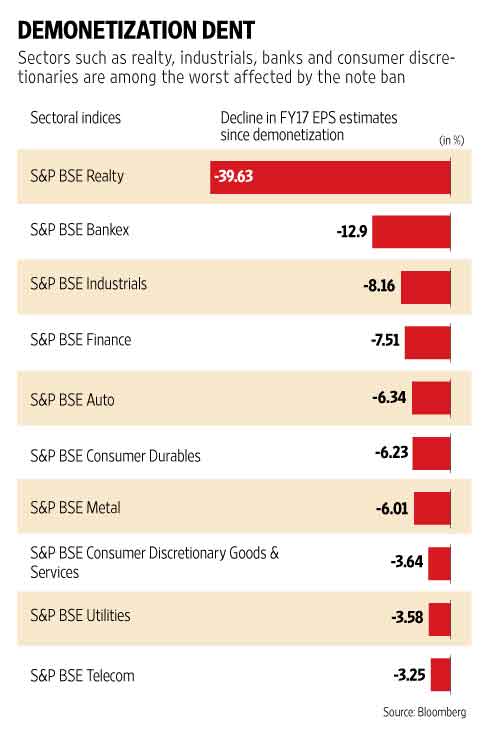 Banks have not only been hit by slowing credit demand, they have also had to forego fee income on ATM transactions and card payments.

Reserve Bank of India data shows credit growth falling to 5.1% year on year by 23 December, a sign of the economic disruption caused by the note ban.

The fall in earnings has in most cases been captured by the decline in stock prices.

For consumer-oriented stocks, while a much-awaited revival is postponed, the consumption story will play out in as soon as a couple of quarters, said analysts.

“Consumer discretionary stocks have been hurt more than consumer durables/staples because for the former, liquidity crunch has led to postponement of demand,” said Sanjiv Bhasin, executive vice-president, market and corporate affairs, at financial services firm IIFL. “However, most of the negative impact is already in the price.”