The Nikkei India Composite PMI Output index, a gauge of private sector activity in the economy, fell in December 2016 to its lowest level since the dark days of the taper tantrum in October 2013. This composite index, which measures activity in both the manufacturing and services sectors of the economy, came in at 47.6, down from 49.1 in November, as the chart shows. Any reading below 50 indicates a contraction, which means that demonetisation has resulted in the private sector contracting for two months now. 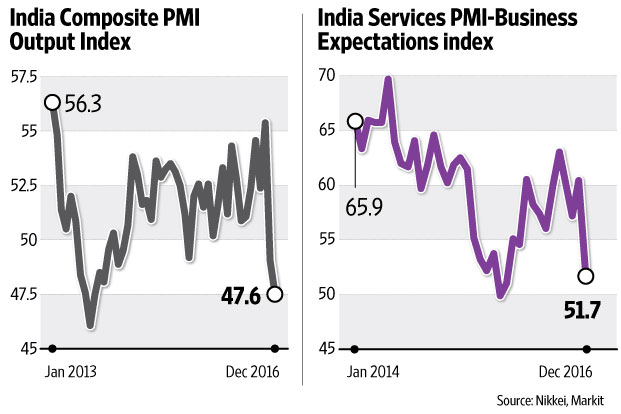 The survey measures expansion or contraction compared to the previous month, so the contraction in both November and December indicates that the state of the economy has gotten worse and that too at a more rapid pace.

Both services and manufacturing contracted in December, but services have been hit harder, with the Services PMI at 46.8, after November’s 46.7.

The Manufacturing PMI did relatively better, falling to 49.6 in December from a reading of 52.3 in November 2016. It’s important to realise that the PMI surveys capture data from the biggest companies and conditions will be much worse in the informal sector.

Pollyanna De Lima, economist at Markit, said, ‘Of concern, business confidence among service providers plunged to one of the lowest in the series’ 11-year history, suggesting that an imminent rebound from the rupee-demonetisation downturn is unlikely.’