The positivity created by the online sales campaigns during the festive season did not last long for logistics solutions providers. Demonetisation and the resultant cash crunch impacted retail volumes on e-commerce platforms that depend on cash-on-delivery transactions.

With volumes yet to see meaningful recovery even after almost two months of cash curbs, analysts are paring earnings estimates for logistics solutions providers. IIFL Institutional Equities reduced its earnings estimates for Blue Dart Express Ltd by a steep 28% to account for sharp decline in e-commerce volumes.

The broking firm warns of more cuts if consumer sentiment remains weak and e-commerce industry volumes fall further. A little less than a quarter of Blue Dart’s revenue (around 23%) come from e-commerce logistics. This segment is estimated to have been worst hit by the cash crunch. 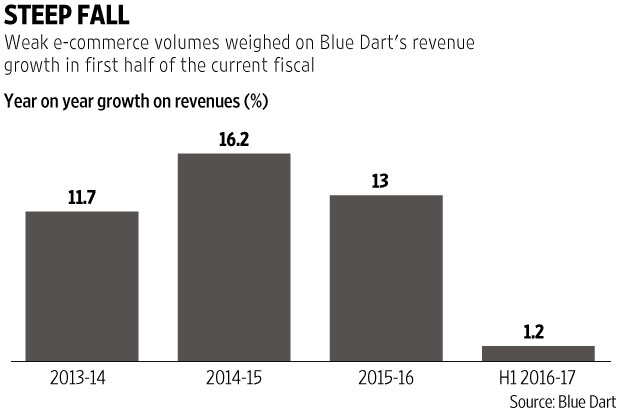 The business-to-business segment (B2B), which contributes three-quarters of Blue Dart’s revenues, is not as badly affected. But recovery in this segment remains elusive. “The B2B segment is unlikely to register meaningful growth in FY17 as businesses adjust to changes in working capital cycle,” IIFL said in a note released in December.

If indeed Blue Dart’s business gets affected as feared, then the company may well finish the current fiscal year with negligible or low single-digit revenue growth. In the previous five fiscal years, revenue registered average annual growth of 13.5%.

As online discounts fell and business-to-consumer (B2C) e-commerce growth slowed, revenue in the first six months of the current fiscal year grew just 1.2%. The second half was expected to be better and the festive season did not disappoint. But the currency crunch accentuated the usual slowdown in post-festive consumer spending and this has hit e-commerce logistics volumes, IIFL says.

An analyst points out, though, that organized firms are gaining market share from their unorganized peers. This may improve Blue Dart’s market position. According to IIFL, niche and small e-commerce logistics firms were the worst affected by the current slowdown and they may yield to consolidation.

But the benefits, if any, will be visible only in the long run. In the meantime, weak e-commerce business and earnings cuts can exert downward pressure on the stock, which has already seen a significant correction. “Continuation of subdued sentiments risks further downgrades in earnings, and weighs high on valuation multiples which anyway are not cheap,” IIFL adds