BENGALURU: The New Year is unlikely to be kind to Indian IT firms. After experiencing a horrible 2016, Indian IT companies had hoped for some respite. But cloud, automation and artificial intelligence are expected to cut into how much companies can earn.

Experts see a 3% contraction in revenue this year due to cloud, automation and cognitive and expect more clients to want to do things themselves rather than outsource.

“If 2016 was difficult I expect 2017 to be harder. We also see a trend of revenue compression driven by automation, cognitive and cloud and we expect that this alone will reduce revenues from the existing book of business by 3% in 2017,” Peter Bendor-Samuel, CEO of analyst firm Everest Group, told ET.

Bendor-Samuel added that while he does not expect the Indian outsourcing industry to contract, he does see a deceleration of growth and higher pressure to cut prices.

The industry already expects growth to be challenging. Customers have been delaying finalising their IT budgets and smaller firms like Mindtree have said they will move away from a full-year strategic plan to craft plans each quarter based on how the year plays out.

Industry lobby Nasscom has already cut the growth target for the sector to 8-10% from 10-12%.

Making matters worse is the fact that European clients are facing the aftermath of Britain’s vote to exit the EU, and US clients are watching if President Elect Donald Trump’s harsh rhetoric on outsourcing will turn into protectionist policies.

“In addition, pursuing robotic process automation (RPA) is the number one priority for operations leaders, which is slowing down outsourcing activity as increasing numbers of clients explore RPA investments as an alternative to using Indian services,” said, Phil Fersht, CEO of HFS Research.

Indian CEOs have been increasingly focussed on boosting their automation credentials in the wake of customer demand for lower prices.

Infosys CEO Vishal Sikka sent a letter to Infosys employees asking to adopt automation to become more productive at work. “The road ahead is long and not easy, the teams can no longer have a lackadaisical attitude. The future promises to be more disruptive, especially for our own business,” Sikka said in the letter.

Indian equity analysts at Kotak Institutional Equities, however, say the year could be promising as there are initial indications of higher spending in financial services and announcements of integrated digital deals. 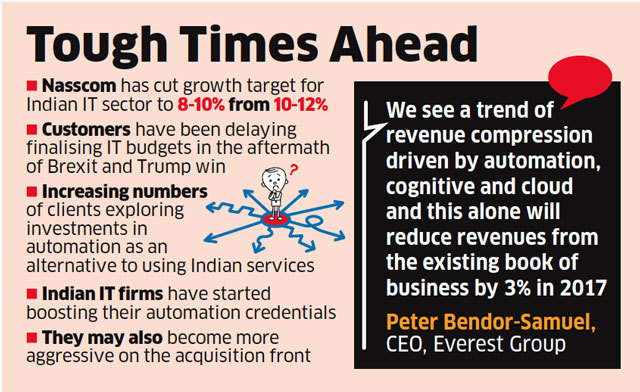 “We also expect focus on – (1) budgeting cycle given that some verticals such as healthcare may delay in view on new President in US and (2) magnitude of pricing pressure and offsets available,” the brokerage said in research note.
Kotak said the “Indian IT will likely grow 8-9% in FY2017 and could grow at same pace or accelerate in FY2018.” Experts also hope that 2017 is the year that Indian IT players become more aggressive on the acquisition front. Larger rival Accenture has spent of $1billion in the last year making a slew of tuck-in acquisitions.
“Companies such as Accenture have moved much faster to acquire new capabilities through an aggressive M&A campaign.
The Indian firms for the most part have attempted to grow their own talent but this is leaving them far behind the race for market share,” Everest’s Bendor-Samuel said.

But a bigger hurdle will be the need to fundamentally change how they have worked in the past. “The biggest challenge for the Indian IT firms is to become more consultative with clients, as opposed to being strong project managers. Training talent, hiring a more global and diverse workforce, making tuck-in digital acquisitions will help change this culture for some of the firms,” HFS’ Fersht said.

JK Technosoft expands its footprints in North-West Europe; with a new office in the Hague, Netherlands