The gap between India’s share of world market capitalization and its share in world gross domestic product (GDP) has widened to the highest in at least 13 years.

This is due to the underperformance of Indian markets in comparison to developed and emerging markets on the back of a flight of capital to dollar assets and investor sentiment being hurt by demonetisation—at least in the near term.

While India’s GDP as a share of global GDP is 2.99%, its share of market capitalization is 2.26%, a gap of 73 basis points and the highest since at least 2003, according to data from Bloomberg and the International Monetary Fund (IMF). A basis point is one-hundredth of a percentage point. 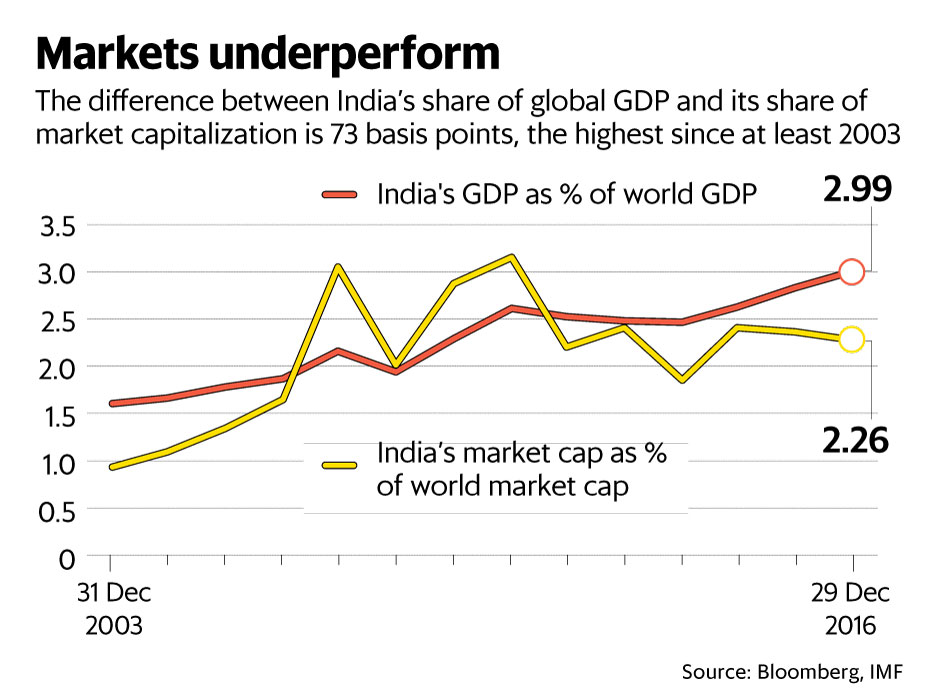 GDP data has been considered as per IMF estimates, as recent government data is not yet available.

“The data implies that Indian equity markets have underperformed global equity markets. One of the reasons for this is the general underperformance and selling pressure faced by the emerging markets, “said Gaurav Dua, head of research at Sharekhan Ltd.

“Second, is the India-specific issue relating to demonetisation, and its adverse impact,” added Dua.

Corporate earnings that were poised for a consumption-fuelled take-off on the back of a good monsoon and sharp wage hikes are expected to be hit by the sudden withdrawal of high-value currency notes as the effects of a cash crunch ripple through the
system.

The surprise announcement scrapping Rs1,000 and Rs500 notes on 8 November, in an attempt to curb black money, counterfeiting and terror financing, led to a cash deficit as banks struggle to replace the demonetised notes.

The move has dashed hopes of consumption jump in Asia’s third largest economy, which was looking up with a good monsoon after two years of drought, along with the implementation of the Seventh Pay Commission’s recommendations. Consumption that would have been fuelled by black money will come to a halt as well.

“This could also be due to demonetisation. Overall, emerging markets have been reeling under pressure due to a stronger dollar. Money has been flowing out from EMs (emerging markets) to DMs (developed markets),” added Bodke.

The dollar index, a measure of the greenback’s strength against six major currencies, gained 3.66% in 2016, rising for the fourth straight year. As a consequence, the rupee and other emerging market currencies depreciated. The rupee fell 2.61% against the US dollar in 2016.

Separately, India’s market capitalization as a percentage of GDP was 68.17%, the lowest in the past three years, and sharply lower than its 10-year average of 79.92%.

“We are in the midst of a global risk-off trade, where capital is gravitating out of EMs to DMs such as US. This is due to expectation of pursuit of reflationary policies by the incoming Trump administration, looser regulations and lower tax rates,” said Bodke.

Also, valuations could be turning attractive, but not yet been captured fully in the price and estimates as some earnings downgrades may still be on their way.

December quarter corporate earnings, which will start trickling in during the second week of January, will throw some light on the impact of demonetisation.

Investors are anxiously awaiting commentary by companies on what lies ahead.

“Valuations on a macro level have turned attractive. However, the elusive growth in corporate earnings has kept the price-earnings multiple still at higher than average multiples,” said Dua of Sharekhan.