Mumbai: Mounting bad loans and record losses by certain public sector banks (PSBs) have affected fiscal 2016 dividend payouts to shareholders, especially to the government which will have to forego a large chunk of it.

The Centre will earn Rs.1,619 crore in dividend income for the previous fiscal, the lowest since fiscal year 2003.

Of the 25 PSBs, only 10 banks declared dividends for the year on the basis of their financial performance and annual profitability. These include State Bank of India Ltd (SBI), three of its five associate banks, Union Bank of India Ltd and Oriental Bank of Commerce.

To be sure, most state-run banks such as Punjab National Bank Ltd (PNB), Canara Bank Ltd, IDBI Bank Ltd and Bank of India Ltd posted huge losses, accounting for higher provisions and bad loans. In fact, PNB and Canara Bank reported the highest level of losses in the banking system. 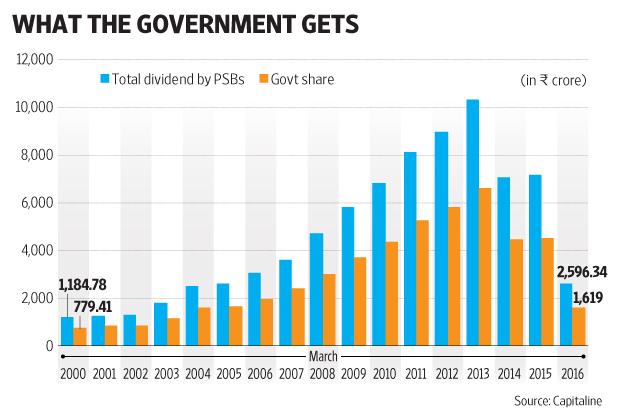 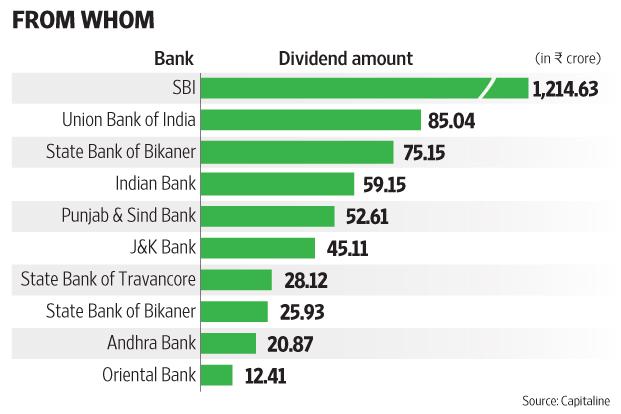 SBI declared a final dividend of Rs.2.6 per share, which will help the government earn Rs.1,214.63 crore in proportion to the 61.32% stake it holds in the country’s largest lender.

The government will get a little over Rs.200 crore in total from three other PSBs— Union Bank, State Bank of Bikaner and Indian Bank.

Experts said the reduction in dividend income is largely due to stressed assets and losses among state-owned banks. Dividends can be paid only out of profits or from reserves of accumulated profits, experts confirmed.

“Instead of taking dividends from the banks and routing it back to the banks in the form of capital infusion, the government might allow a few banks to skip the dividend payment for the fiscal, so that they can plough earnings back into the business,” said Rajnath Yadav, analyst, Choice Equity Broking Pvt. Ltd.

The government budgeted Rs.10,277 crore as dividend income from all PSBs and financial institutions in fiscal 2015, two and a half times of what it managed to collect the year ago. However, it later revised its target to Rs.5,100 crore in view of the capital requirements of state-owned banks.

The government plans to infuse Rs.70,000 crore into state-run banks over the next four years to reinforce their capital base, help them meet demand for credit and adhere to new international standards that will take effect by the end of 2017.

“It (receiving dividend) is like passing things from one hand to another and back. It is a meaningless exercise under the current scheme of things. Plus, there is additional tax burden for banks when distributing dividends at a time when every penny counts for them,” said a banking analyst at an institutional research desk of an American financial services firm. The analyst did not want to be quoted due to the firm’s compliance requirements.

Mint reported on 1 August 2015 that the Rs.70,000 crore infusion accounts for less than half the total capital requirement of banks, estimated by the government at Rs.1.8 trillion over the next four years, excluding internal profit generation. The estimate is based on the assumption that bank credit will grow at an annual pace of 12-15%. Some bankers said the planned infusion wasn’t enough.

Most state-run banks have had their profitability dented because of a steep increase in bad loans and restructured loans, requiring them to set aside more money to cover the risk of default. Stressed advances at scheduled commercial banks rose to 11.1% of total advances in March from 10.7% in September, according to the Financial Stability Report released by the Reserve Bank of India (RBI) in July 2015.

India Ratings and Research Pvt. Ltd estimates that banks need a total of Rs.3.7 trillion between fiscal 2017 and 2019 to meet Basel-III norms, of which government infusion should be Rs.1.4 trillion.

The norms require banks to maintain a minimum capital adequacy of 9% and a Tier-I capital ratio of 7%. Indian banks need an estimated Rs.3.7 trillion by the year ended 31 March 2019 to meet the requirements.

Capital adequacy is an indicator of the financial strength of banks, expressed as the ratio of capital to risk-weighted assets.