MUMBAI: The Reserve Bank aims to keep a close check on peer-to-peer (P2P) lending, which has been booming globally, by stipulating that anyone looking to lend through such online platforms has to be a bank account holder. With banks enforcing stringent know your customer (KYC) norms, this should ensure that fund sources can be tracked and that the P2P route won’t be used to launder money.

This was one of the proposals made by RBIat a meeting between representatives of the P2P lending industry and a senior RBI official last Monday. 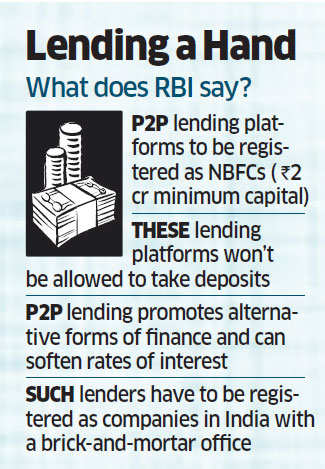 While P2P lenders in India are currently unregulated, the RBI recently issued a consultation paper on rules for the sector and sought suggestions on this before May 31. The meeting was held as part of this exercise. P2P lenders are online platforms that bring together individuals who seek credit and investors ready to meet that demand.

The platforms encourage a number of investors to come together and lend money to a single borrower. The rate of interest usually gets decided through reverse bidding.

The RBI wants to make it mandatory that all transactions between borrowers and lenders are conducted through banks but the regulator is not expected to set an upper limit for the amounts that can be loaned through the platforms. The regulations will be aimed at simplifying the process of recognition for the newly emerging lending sector, experts said

“The primary sense that we got from RBI through this meeting is that regulations are going to come in the next few months,” said one of the people cited above. “They are watching this sector keenly because of our ability to address the increasing credit demand of the country, especially through a less cost-intensive manner with technology.”

India’s P2P lenders number around 30 online platforms, including Delhi-based Faircent, i2iFunding and Mumbai-based Lenden Club. A few weeks ago, JM Financial picked up a 9.84% stake in Faircent and i2iFunding raised around Rs 2 crore.

While enjoying rapid global growth, P2P lending has raised concerns among regulators over the quality of borrowers and other issues. One of the top companies in the sector, US-basedLending Club , recently saw the exit of CEO Renaud Laplanche over alleged violations related to the sale of loans. While the Indian authorities have similar fears, the regulator doesn’t want to stand in the way of innovative methods that can widen access to money, experts said.

Given the worries, the P2P sites have asked RBI that they be allowed to open a nodal account for every borrower to make monitoring easier.”We have requested RBI to allow us to use a nodal account with the bank for exchange of money between lenders and the borrowers, very much along the lines of an escrow account that prepaid payments instruments (PPI) licence holders have,” said one of the participants at the meeting who didn’t want to be named.

“We will not be able to touch funds in these accounts but any kind of money movement would trigger an alert in our systems.” Such accounts would allow the platforms to keep an eye on the repayment behaviour of borrowers and the manner of withdrawal, he said.

This will help the reporting of defaults or unusual behaviour by borrowers to credit bureaus in real time, he added. “The RBI has also clarified that since the P2P lending websites would be categorised as a special form of non-banking finance company, they would get automatically integrated with the credit bureaus, which would make reporting cases of defaults easier,” said another founder of a P2P platform who attended the meeting.

He further added that the platforms are hoping to integrate with the unified payments applications of banks in order to smoothen the transfer of funds between borrowers and lenders.