NEW DELHI: India’s largest public sector lender State Bank of India BSE 6.42 %, which reported Rs 98,173 crore or $15 billion in gross non-performing loans (GNPA), does not seem to worry the analysts’ community at large. Most analysts are of the view that the worst is almost over for SBI.

The bank’s asset quality deteriorated further in Q4, with gross non-performing assets (NPA as a percentage of gross advances) rising to 6.5 per cent from 4.25 per cent recorded in the year-ago period.

The optimism stems from the fact that SBI was one of the first banks to start a cleanup its balance sheet way before the Reserve Bank of India (RBI) came out with a directive for banks to address the NPL (non-performing loans) issue by March 2017.

The bank has maintained a decent coverage ratio of 61 per cent and net NPA at 3.81 per cent. Other stressed assets at Rs 60 billion and SDR/5:25 exposure at Rs 26 billion indicate limited scope of further asset quality decline from this point. Capital ratio at 13.12 per cent is healthy, and RoA/RoE should also improve from here on.

State Bank of India’s March quarter net profit was down by 66 per cent to Rs 1,264 crore weighed down by a Rs 30,313 crore surge in sticky loans. It had put another Rs 31,350 crore of assets on the watch list, in line with the Reserve Bank of India’s directive to lenders to clean up their books.

“Overall slippages stood at about Rs 30,000 crore while incrementally more than Rs 15,000 crore-odd assets has been recognised by the bank this quarter. Some of it could be proactive cleaning up,” Rajiv Mehta, IIFL said in an interview with ET Now.

“We do think there could be more stress coming up for the bank over the next couple of quarters. So probably current GNPL level of 6.5% is not the peak,” he added.

The asset quality stress is likely to weigh on the stock more if the largest public sector bank decides to merge its subsidiaries. This would increase the proportion of bad loans on the books of SBI.

However, investors who have a time horizon of more than a year can look at buying the stock on dips or even at current level. Shares of State Bank of India are already down over 10 per cent so far this year and nearly 30 per cent in last 12 months.

“SBI is one of the very few banks which were completely upfront about the stress on its books as well as expected future stress. We believe the management has done a decent job of achieving balance sheet cleanup, while being rightly cautious on growth,” Pankaj Sharma, Head of Equities, Equirus Securities, told ETMarkets.com.

“However, we would wait to see how the books are affected by the merger of associate banks, as any additional stress arising out of these acquisitions could add to troubles,” he added.

Sharma said considering what PSBs are going through, SBI is at very attractive valuations and the stock should do well going ahead. 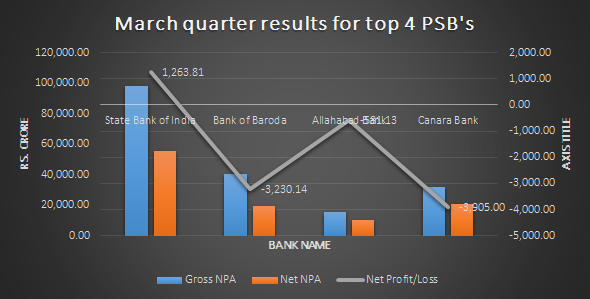 SBI’s operating profit grew 11.2 per cent year-on-year to Rs 14,192 crore during the quarter. But provisions to cover sticky loans surged 143 per cent to Rs 13,174 crore, which pulled down the profit figure more than the market consensus, which analysts in an ET Now poll had pegged at Rs 1,840 crore.

SBI Chairperson Arundhati Bhattacharya said about 70 per cent of the assets on the watch list may turn sticky but the damage could be restricted to 30 per cent if the economy does better.

She said the proposed absorption of five associate banks – creating a bigger institution – may cost it Rs 3,000 crore on account of provident fund payments but the exercise would add efficiency and lower cost.

Most of the PSU banks are trading at very attractive valuations but concerns of increasing bad loans on the books have kept investors away. A rise in bad loans hurts profitability of a bank and also reduces its lending capacity.

Most of the PSU banks would require capital infusion from the government to keep their operations going. SBI stands apart from other PSU banks, feel experts.

The stringent recognition requirements of RBI, which has caused the banking system stress, was a step in the right direction, say experts. And with an improved Bankruptcy Act in place, there should be accelerated sales of stressed assets, leading to better recoveries going ahead.

“If you compare all the other PSU banks, they have not delivered good numbers, be it PNB BSE 2.68 % or BoB. For SBI, a positive result means more upside rather than downside,” Sandeep Raina, Edelweiss Broking, said in an interview with ET Now.