Investors of Britannia Industries’ shares are realising the bitter truth that good times don’t last forever. Following a disappointing performance in the fourth quarter, shares of the biscuits maker dropped 8.6% in its biggest single day fall, raising doubts about the company’s performance peaking out in the near term.

Britannia had been the best performing stock of the BSE FMCG Index in the past three consecutive calendar years, mirroring the company’s on ground outperformance during this period. The good performance of the past three years was achieved by plucking the low hanging fruits in the areas of distribution, cost control, supply chain and premiumisation of portfolio. Also, low raw material prices helped improve the operating margin in the preceding three quarters. 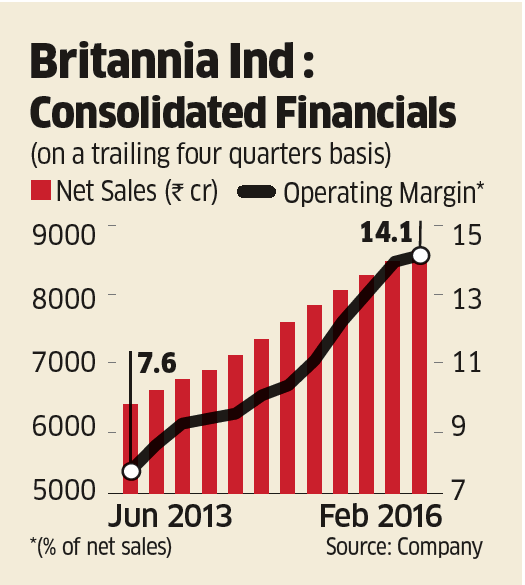 For the March quarter, the company’s revenues grew 8% – the slowest in recent quarters – partly impacted by the phasing out of excise duty sops. It is the fourth quarter of slowing revenue growth. The operating margin increased 80 bps to 13.3% – with its expansion limited by climbing raw material prices. Intensifying competition, slowing growth of biscuits as a category and base year effect are blunting the growth rates.

So, is it the end of the good show for Britannia? Unlikely. Despite the increased odds, the company managed to grow volumes by 10%. This is commendable given that two years ago the company’s volume growth was 2-3% and biscuits as a category is growing at low single-digits.

Post the re-rating of the past three years, the stock is likely to consolidate at current levels in the absence of major positive triggers in the near term. However, a recovery in consumer sentiment aided by a good monsoon should provide the right momentum to the stock.

The company has still many existing areas of underperformance which when corrected upon will yield growth. Britannia has huge scope to match its distribution footprint of 4.5 million outlets with its rival Parle’s around 5.7 million outlets reach. It has scope for correcting its underperformance in categories like cream biscuits, improving market shares in geographies like states of UP and MP. Its international business is yet a small part of its total business – contributing only 7% to the revenues. The company is undertaking due diligence of its dairy segment before it commits to its strategy in the dairy business.