Mumbai: Private equity investors made the highest number of exits in five years in 2015 and fresh investments into India hit an all-time high during the year, according to Bain and Co.’s India Private Equity Report 2016.

This year, too, exits could remain strong but the pace of investments is likely to reduce as transactions, particularly in the consumer technology segment, have slowed down significantly.

In 2015, general partners (GPs) returned $9.4 billion to their investors as compared with $6 billion during the previous year. Deal volumes rose 10% with 213 exits reported—the best in five years.

“India clearly had a good last year in terms of both investments and exits that shows healthy signs for the market; however, the nature of exits have changed as IPOs (initial public offers) have been on a declining trend and sales were led by secondary and strategic deals. Even after getting close to mid of 2016, we expect continuation of secondary exits and strategic deals,” said Arpan Sheth, partner at Bain and Co.

Investors in sectors such as banking, financial services and insurance (BFSI) and information technology (IT) and IT enabled service (ITes) saw the best exits. 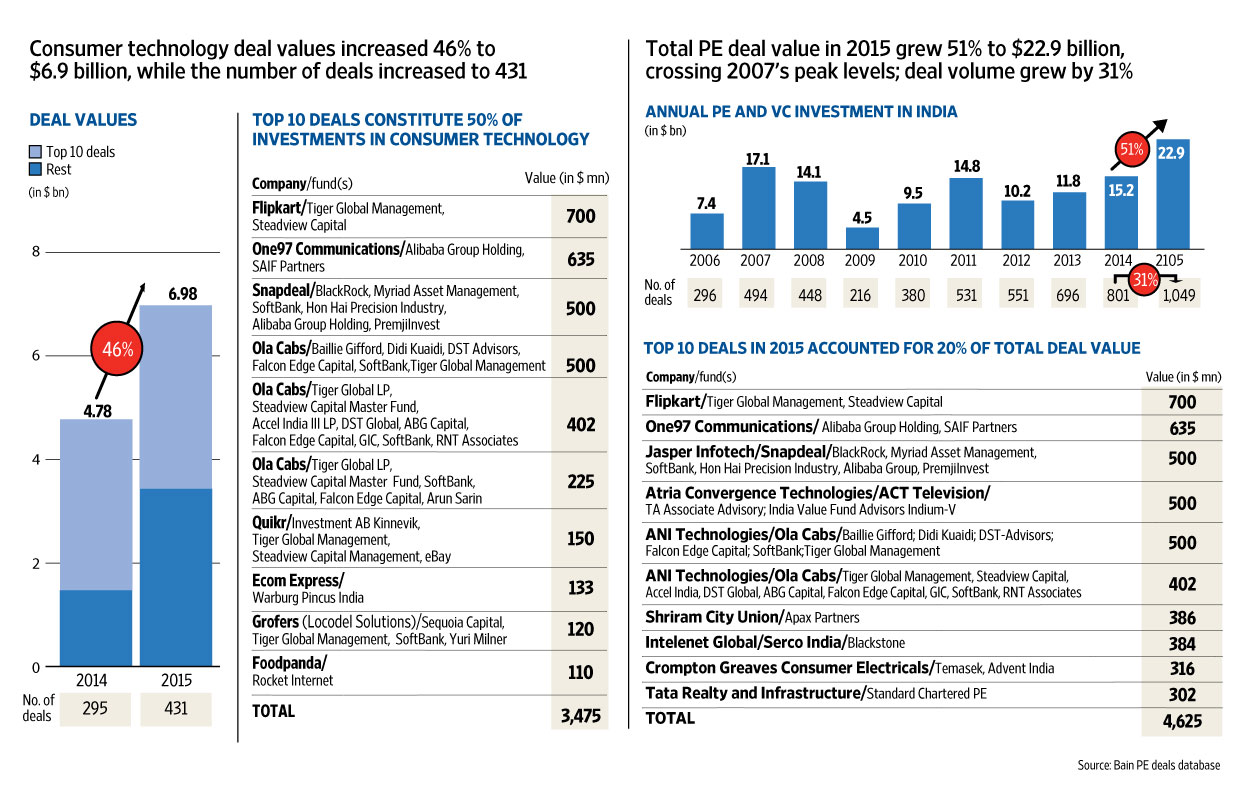 Among these was Apax Partners’ deal to sell its stake in IGate Corp. for nearly $1.15 billion.

Even though the opportunities to exit investments have improved, most GPs who had invested more than $50 million each plan to hold on to their investments made before 2008 till they can make more profitable exits.

The energy and BFSI sectors dominate unexited deals from the period 2007–08.

According to the report, deal value, including real estate, infrastructure and venture capital (VC) deals, increased by 51% to $22.9 billion—surpassing the 2007 peak levels of $17.1 billion.

The overall deal volume in India grew by 31%.

India remains the most attractive market for private equity in the Asia-Pacific region, followed closely by China, said the Bain report.

Stronger gross domestic product (GDP) growth, a vibrant entrepreneurship ecosystem and a positive outlook are working in favour of India, making it an attractive investment destination in 2016. Healthcare and financial services will be the most attractive sectors for investment in the next two years, the report said.

Even though both deals and exits have picked up, limited partners have remained cautious in allocating fresh capital to Asia and to India.

Funds allocated to the Asia-Pacific region declined by 14% in 2015 to $50 billion. Similarly, funds allocated to India dropped by 12%. However, the capital lying with general partners stood at $11 billion in 2015, suggesting that there is no dearth of capital, the report added.

“Last year was a high watermark for new investors in India; for both consumer tech and real estate financial services (with a few other sectors as well); however, there is an expectation of a constant increase in investment by SWFs, which again depicts a healthy sign of increasing investments in India,” said Sheth.

Consumer technology firms, which contributed significantly to the surge in private equity deals last year, have seen a significant slowdown in fund-raising activities so far this year.

In 2015, consumer tech firms managed to raise $6 billion, 46% more than the same period last year. The number of deals in the sector increased from 295 in 2014 to 431 in 2015. Two of the largest deals last year included Tiger Global Management and Steadview Capital’s investment of $700 million in e-tailing firm Flipkart, and Alibaba Group Holding and SAIF Partners’ investment of $635 million in One97 Communications. This year, the focus has shifted towards other segments such as financial technology and eduction technology, among others.

The Bain report also said that the profile of consumer technology investments in India is different from those in the US. Investors in the US last year pumped large amounts of capital in online lodging and social networking, whereas in India, investors were mainly inclined towards invest in e-tailing, online travel and lodging, payments, classifieds, logistics for e-commerce.

Though capital continued to flow into the consumer tech space, only about $0.8 billion of exits happened in the sector and several were early-stage acquisitions aimed at consolidation and capability building.