After years of effort, India has managed to renegotiate its tax treaty with Mauritius , marking a bold step by the government to firmly shut the door on a pact that may have cost the country much by way of revenue. ET takes a look back at the accord that’s more than three decades old. 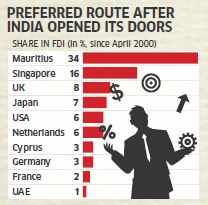 WHAT WAS THE BIG WORRY: Round tripping Instead of direct investment, Indian money going out and being invested via Mauritius India denied taxes that it should have got.

Identity of investors not known The Mauritius route allowed investors to hide behind corporate structures.

KEY CHANGES IN THE TREATY: Capital gains on profits to be taxed India gets right to tax capital gains made by investors on shares of Indian companies

No tax on other instruments The new regime applies to only profit made on shares Debentures, mutual funds , derivatives and convertibles not covered.Grandfathering benefit Investment made before April 1, 2017, will get full benefit of capital gains exemption.

WHAT DOES IT MEAN FOR US: Chance for India to clean its capital gains tax policy

Mauritius tax treaty that gave huge benefits to foreign investors denied India flexibility in taxing capital gains domestic and foreign investors on par, the government now gets room Real FDI MUCH OF MAURITIUS FDI was believed to be Indian money. With the loophole closed, there will be a clearer picture on overseas investment End of confusion MAURITIUS ROUTE HAS been under much dispute and subject of speculation. That comes to end India gets more tax .