India is the only country among top automobile markets where one company controls more than a quarter of the sales.

In fact, that company, Maruti Suzuki, has a market share of about 50% in the local car market that means it makes one in every two new cars on our roads.

If other passenger vehicles such as utility vehicles and vans are included, its market share shrinks a tad to 46.7%. The top two companies, Hyundai Motor being No. 2, keep more than 64% of the passenger vehicle market to themselves.

Automakers that rule the world Toyota Motors, Volkswagen, General Motors, Ford Motor and Renault-Nissan have mostly remained fringe players in India’s car market, the world’s fifth largest by sales volume. The highest share among them, a mere 4.7% as of March 2016, was held by Toyota.

It’s the lack of knowledge of the Indian market and a mindset that isn’t tuned to the local requirements that create roadblocks for these automakers, say industry executives and experts.

Their board members, sitting in Detroit, Wolfsburg or Tokyo, do not have in-depth understanding of the conditions or factors impacting the Indian market when they vote on an investment proposal for a small car platform.

They, instead, end up voting in favour of a larger platform which may suit developed markets but not India. “India is predominantly a small car market,” said Abdul Majeed, partner and automotive expert at Price Waterhouse, a network firm of PricewaterhouseCoopers.

“These global OEM (original equipment makers) are traditionally not very strong in the small-car segments and they have not been able to have very strong smallcar production and distribution strategy for India.”

These companies are often reluctant to bet on a small car. Globally, they are known for producing big cars that offer fat margins, but in India, the margin on a small car ranges between $500 and $1,000 per unit. The investment required in developing both big and small cars is somewhat the same.

“The proposals for emerging market cars or developing market small cars always end up in the dustbin and hence these companies keep struggling to make a dent in the (Indian) market,” said an industry veteran, speaking on the condition of anonymity. “More often than not, these cars (made for developed markets) get reverse engineered for the Indian market and end up as big failures.”

Maruti scripted its success with small cars, from the 800 it launched more than three decades ago to several versions of the Alto, WagonR, Swift and now the Vitara Brezza.

The only other company that has challenged it effectively is Korean Hyundai Motor, which entered India in 1998 with the launch of the Santro that cost less than Rs 3 lakh, taking on some of Maruti’s popular models.

Hyundai’s strategy of having a large number of small cars in the portfolio has clicked, with the company enjoying about 17.4% market share in passenger vehicles. 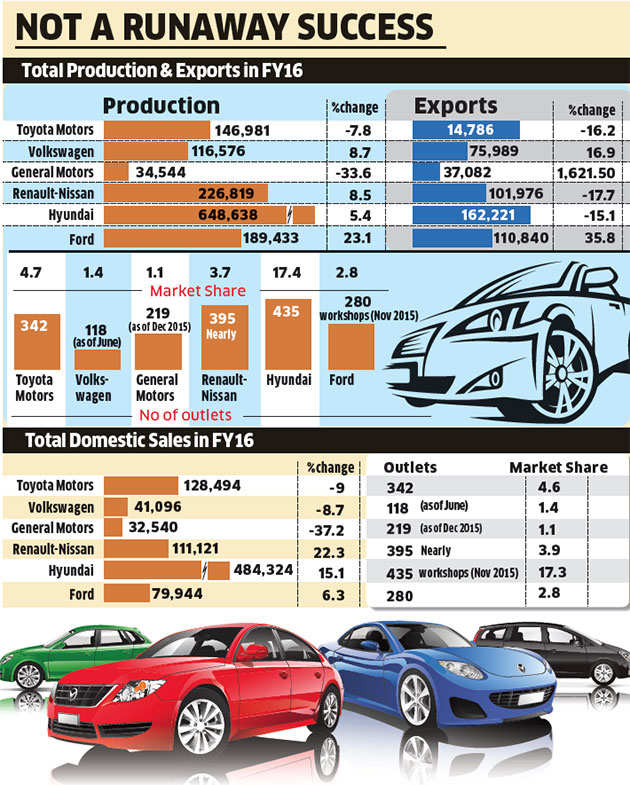 MARKET KNOWLEDGE
“To be successful in any market, understanding the customer is most important to design the right product lineup, effective channels to reach out to the customers and create a relevant aspirational brand,” said Rakesh Srivastava, senior vice president for sales and marketing at the local unit of Hyundai.

“Hyundai’s success lies in gaining customer insight and building an effective product portfolio.” Others didn’t get the products right, though there had been sporadic successes involving one or two models. Toyota ruled the utility vehicle space with the Innova, but its experiments with small cars haven’t been very successful. Many Indians bought Ford’s Ikon and EcoSport compact SUV, but the response to its other models had mostly been lukewarm. The performance of some others has been even worse.

For GM, which entered India 18 years ago, there has, so far, been very little to celebrate the world’s No. 3 automaker had just a 1.3% market share in India in 2015. Volkswagen, which is a spot above GM in the global market share, is also yet to get the Indian customer hooked to its products. The most recent instance where a company has had success in the small car space is Renault, with its Kwid that has come in at an aggressive price and in a refreshing style.

A top executive said the boards of big European and American companies have to realise that the investment proposals for the Indian market for new products cannot be seen with the same lens as they see those in developed markets. The per unit profit in India will always be a fraction of that in a developed market.

But the market with more than 1.25 billion people offers a big opportunity. According to the government’s Automotive Mission Plan, the passenger vehicles market is projected to grow to 9.4 million units by 2026 from 2.8 million in the year ended March 31, 2016.

A senior Indian executive at one of the automakers blamed the HR strategies of the companies for the failure. “These companies generally hire expatriate top officials who don’t have much understanding of the local situation and they try to impose their western strategy, which backfires,” this executive said.

This approach, he said, reduces the space for others with local market knowledge to work. Some executives have had brilliant track records in local companies like Maruti, Hyundai India and Mahindra & Mahindra, but the situation keeps going from bad to worse in the absence of a firm consensus at the board level for making exclusive investment in a market like India.

The latest trend is clubbing the Indian market with the Chinese for the development of ’emerging market’ plans. “This is once again a flawed strategy because the two consumers are very different. We have already seen how badly the three products introduced by Chevrolet in India from the Chinese market have fared,” the executive added.

COURSE CORRECTION
Top global auto majors seem to be trying to correct the course. The big names in the industry, Mary Barra of GM, Mark Fields of Ford and Renault-Nissan boss Carlos Ghosn are visiting India and declaring the importance of the country in their plans for the future.

While they aim to strengthen their presence in India, these companies are also using their manufacturing facilities present here for exports. But experts say relying on exports cannot be a sustainable model as this makes them uncompetitive in the local market.

The companies will also have to refresh their product portfolio more frequently if they want to be successful here, say industry experts.

Toyota, for instance, had launched the Etios and Liva in the mass segment space, and that too happened in 2011, a good five years ago.

DEALERS SUFFER
While these auto market players may say that they have profitable business operations here, helped by exports, local dealers suffer as India sales remain low. With an average volume of 20-30 cars per dealer a month, most channel partners for GM, Nissan, VW, Ford and Skoda are operating at big losses, said people in the know.

It is not that the channel partners are always ignored time-to-time, the automakers try to compensate them through funding and with higher incentives, but that again isn’t a sustainable model, say industry executives.