Kolkata: An independent survey conducted last November to assess the possible outcome of the West Bengal assembly election showed that the Left Front was likely to win only 21 seats, and the Congress 14 of the total 294 seats.

Take away a handful that the Bharatiya Janata Party was seen winning, and the Trinamool Congress looked set to romp home with more than 250 seats.

Because at least 150,000 respondents from across the state were polled, the survey was widely seen as a reliable indicator of what lay in store for opposition parties, said Biswanath Chakraborty, professor of political science at Rabindra Bharati University and leader of the team that conducted the survey.

However, the survey also showed “high transferability” of votes, according to Chakraborty. In other words, supporters of the Congress and Left parties were willing to come together and vote for a common candidate to defeat the Trinamool Congress.

“It wasn’t easy to measure transferability,” said Prasanta Ray, a teacher of social sciences for more than five decades and an adviser to the survey team. 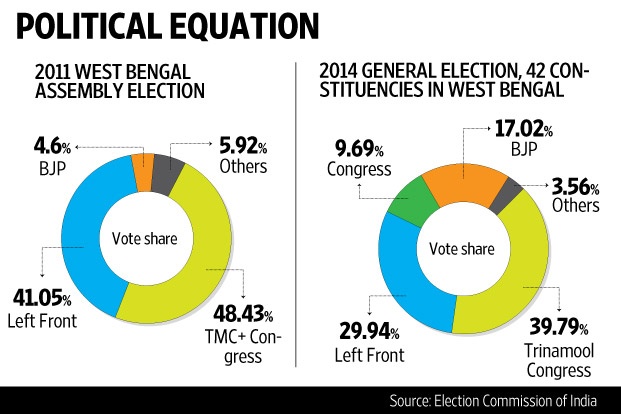 But it appeared that supporters of the opposition parties in West Bengal saw the 2016 assembly election as their last opportunity to stop the Trinamool juggernaut, he added.

Though many were sceptical in the beginning, the Congress and the Left parties managed to move past their traditional rivalry and cobbled together an alliance, which at the end of polling on Thursday has emerged as a threat to the incumbent Trinamool Congress.

A section of top officials in the state administration and the police has now veered to the view that the alliance has a fighting chance of ousting the Trinamool Congress.

But what was the game changer?

The Election Commission of India (EC) has delivered a “miracle”, said one official, asking not to be identified. “Never in my service have I seen such an election,” the person insisted, adding that it is the poll watchdog that may turn out to be the key determinant of who rules the state for the next five years.

Besides unprecedented policing by central forces, the EC ordered the transfer of at least 68 state government officials—policemen and bureaucrats—to make sure they couldn’t influence polling, triggering outbursts from chief minister Mamata Banerjee. She has accused the poll panel of exceeding its brief and intimidating her party’s supporters.

Electoral malpractices have been “notoriously high” in West Bengal, according to Chakraborty, and in almost every election, the ruling party has been able to puff up its vote share by several percentage points either through bogus votes or by blocking supporters of opposition parties from voting.

When the Trinamool Congress came to power in 2011, it allied with the Congress and together the parties polled 48.43% of the votes. In the 2014 general election, it went solo for the first time and secured 39.79% of votes, while the Congress’s vote share was 9.69%—its lowest ever.

That shows the Trinamool’s own vote share in 2011 was likely around 39-40% despite the strong anti-incumbency wave that swept away the Left Front after 34 years in power. 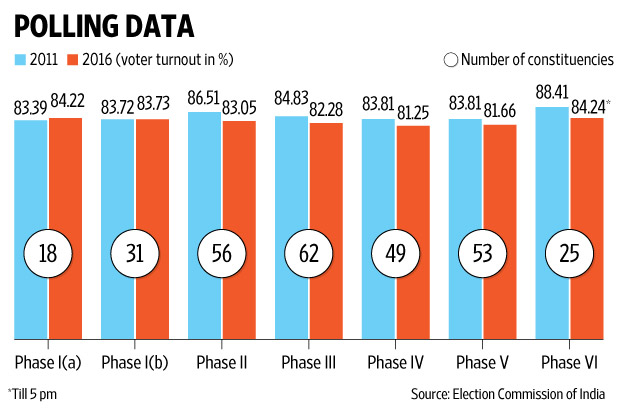 The 2014 general election also shows that the Trinamool Congress has not been able to expand its support base since 2011, said poll analysts Debasish Bhattacharya and Asish Chattopadhyay in a book published in January 2015.

On the other hand, the combined vote share of the Left parties and the Congress in 2014 was at 39.63%, only 16 basis points behind the Trinamool Congress. One basis point is one-hundredth of a percentage point.

The official cited above agreed with the view that the Trinamool Congress’s popular support was unlikely to have increased in the past two years.

Factoring in a vigilant EC curbing electoral malpractices to a great extent, the Trinamool Congress could see its vote share tumble to around 35%, the official added.

That means the alliance is ahead, at least numerically.

There is, however, one red herring in these calculations: the spatial distribution of the Congress’s own vote share has traditionally been skewed. In the 2014 general election, for example, it was as low as 3.64% in South 24 Parganas district and as high as 39.84% in Murshidabad district. So, the alliance’s vote share for the entire state may not truly reflect its chances across every constituency.

Chakraborty, however, doesn’t agree with the view that Trinamool Congress’s support base has contracted. On the contrary, he expects the party’s vote share to inch up to 42-44%.

He sees the Trinamool Congress coming back to power, albeit with narrower margins and fewer seats.

Chakraborty is also not convinced that the EC has been able to root out electoral malpractices in a big way. “Yes, there was better policing this time, but I am not sure it will make a major dent in the Trinamool’s vote share,” he said.

The alliance was unable to man polling booths in at least 70 assembly constituencies, Chakraborty pointed out.

Elections in West Bengal are fought on organizational strength, he said, adding that if the Trinamool Congress is able to swing the result in even half of these 70 constituencies, it will go past the winning post.

“Remember, we are talking of thin margins and, to my mind, control of polling booths can, in such close contests, determine the outcome,” he said.

What could, however, completely alter the equation is a swing in the voting pattern. A recently released sting operation showing Trinamool Congress leaders receiving wads of cash and the collapse of a flyover in Kolkata, which killed 26 people, could act as triggers.

The so-called swing factor has always been difficult to measure, said Ray. But these were “important events” that could influence choice, not just in urban areas but also deep in the hinterland, he conceded.

“Information asymmetry between rural and urban population is often over-estimated,” he said, adding that he would not be surprised if rural voters, too, are found to have been swayed by allegations of graft against the Trinamool Congress.

ABOUT US
businessfortnight is a is a multi-platform publisher of news and information, which includes www.businessfortnight.com www.hindi.businessfortnight.com and www.healthfortnight.com It provides trusted business, financial, healthcare, national, and international news to professionals.
Contact us: editorbusi[email protected]
FOLLOW US
© Copyrights 2012-2020: All Rights Reserved with BusinessFortNight. Managed by Fulcrum Services
Social Media Auto Publish Powered By : XYZScripts.com