Mumbai: Most of India’s top companies that have reported their March quarter financial results have exceeded investors’ expectations, indicating that an earnings turnaround is gaining traction.

A Mint analysis of 76 BSE 500 companies that reported their earnings by Friday and for which comparable estimates were available showed that 64.5%, or 49 of them, beat Bloomberg consensus estimates for net profit. For net sales, 48 or 63.2% of the firms under the review beat estimates.

BSE 500 companies account for 93% of the exchange’s market cap.

The better-than-expected quarterly performance, although many companies are yet to report their financial results, lends credence to the claim that an earnings recovery is already underway, driven by increased government spending and a partial recovery in commodity prices.

Around 52% of the 23 BSE 100 companies that have announced their March quarter earnings have beaten estimates while 30% of firms have missed, which is a healthy trend, Citigroup Inc. said in a note on Friday. “Looking at earnings performance vs expectations, the sectors where most beats have come are energy, telcos and materials,” Citigroup’s analysts Surendra Goyal and Vijit Jain said in the note.

Citigroup also said that March quarter earnings for the 23 companies grew around 12% from a year earlier, exceeding estimates of around 5% by a wide margin. 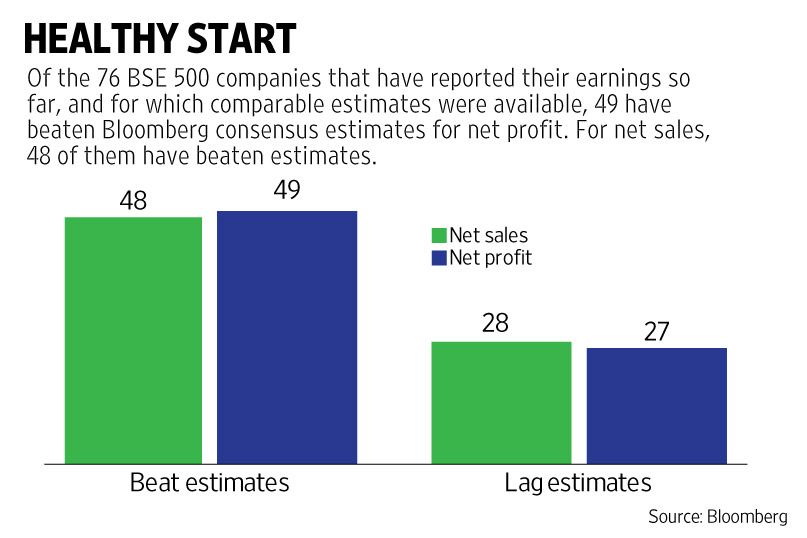 To be sure, earnings review of the early birds does not always depict a clear trend.

“So far, many of the key earnings in the March quarter have turned out to be better than the estimates. However, it is too early to decide how the overall earnings are shaping up,” said Sanjay Mookim, India equity strategist, Bank of America Merrill Lynch (BofA-ML). “Usually, the less exciting or the disappointing results arrive much later in the earnings season. It would be prudent to wait and see how the entire season pans out.”

Separately, a Mint analysis of 84 of BSE 500 companies, which have announced their March quarter earnings, and for which comparable data was available for at least 14 quarters, showed that net sales for this sample rose 6.8% from a year earlier—the fastest growth since the quarter ended 30 June 2014.

Cairn India Ltd and Vedanta Ltd have been excluded from this study as they have reported huge one-time impairment charges.

Operating profit for these 64 companies climbed 19%, the best since the quarter ended 31 December 2013, as companies benefitted from the decline of commodity prices in the preceding quarters.

Net profit for these companies rose 10.1% in the March quarter, compared with 10.7% in quarter ended 31 December 2015. Operating profit margin expanded to 33.59%—the best since the quarter ended December 2012.

To be sure, commodity prices registered gains in the March quarter, but lost heavily in the fiscal year 2015-16. The impact usually shows up for companies with a lag effect.

The Bloomberg Commodity Index of 22 raw materials, from oil to metals, rose 0.34% in the March quarter; it has shed 20% in the year ended 31 March.

“Operating profits have grown due to the lag effect of the decline in commodity prices in previous quarters,” said Sinha of Emkay. “This not reflecting as much for net profits, mainly as the interest costs have been higher, despite the central bank cutting rates, as commensurate transmission has not happened,” added Sinha.

Carmaker Maruti Suzuki India Ltd’s profit fell 11.7% in the January-March quarter on higher tax outgo and production loss because of violent protests by the Jat community near its factory. That profit drop was the steepest in two years. The results were in line with analysts’ estimates.

India’s private banks bucked the trend as they set aside more money to cover for bad loans, eroding their profits. Most of them have missed analysts’ estimates so far.

ICICI Bank Ltd reported a steep 76% fall in its net profit in the March quarter, missing estimates, as India’s biggest private sector bank classified more loans as non-performing and set aside more money to cover the risk of default.

Smaller rival Axis Bank Ltd reported 1.22% drop in net profit for the quarter, its first decline 46 quarters, as it set aside more money and made a contingency provision of Rs.300 crore.

HDFC Bank Ltd, the country’s most valuable lender, stood out as it reported a 20% increase in fourth quarter profit, in line with analysts’ estimates, as it benefited from loan demand from individuals and mid-sized companies.

Hindustan Construction Co. Ltd reported a 7.3% drop in standalone profit for the fourth quarter, hurt by the slow progress in some of its projects, but beat analysts’ estimates.

On the other hand, Infosys Ltd reported a better-than-expected 1.6% rise in fourth quarter dollar revenue over December quarter. It expects dollar revenue to grow between 11.8% and 13.8% in the current financial year.