If you’ve ever found yourself at a warehouse sale, you’d be no stranger to the pushing and shoving that goes on there. But the aggression that greets you at a clearance sale for books is of another magnitude. Hawk eyes scan the offerings in brisk sweeps, eager hands swoop on coveted titles. Dirty looks are exchanged, smug grins break out, depending on the outcome of the moves.

At one such sale recently, organized in Bengaluru by the Gurugram-based company BookChor, the scene resembled a battlefield. Rush hour on a Friday, the first of the three-day affair, didn’t deter hundreds from turning up. The appeal of “Lock the Box”, as the event was called, lay in its innovative format. BookChor, which deals in used books, had cardboard boxes of three sizes, graded by price, and, named, rather imaginatively, after heroes from Greek mythology. The Odysseus Box, costing Rs999, can hold 8-10 books. Its older siblings are The Perseus Box (Rs1,499, 15-17 books) and The Hercules Box (Rs2,499, 28-30 books). The idea is not to sell books by weight, as establishments like Butterfly Books in Mumbai do, but to allow buyers to fit in as many titles as they can into the box of their choice, as long as it can be taped shut at the check-out counter. The definition of a “full box”, however, seemed generously stretched going by a cursory survey of the bounty people were leaving with.

BookChor was founded by a team of four—Bhavesh Sharma, Prateek Maheshwari, Alok Raj Sharma and Vidyut Sharma—to address a problem that commonly plagues college students: finding books within their budget and reach. Alok, whom Lounge met in Bengaluru, says they ran a pilot website to gauge the demand first. After receiving more than 5,000 enquiries in two months, they decided to launch BookChor.com in 2015.

The website, which currently has 200,000 registered users, buys, sells and accepts donations of used books. Although BookChor began by sourcing novels, it has several other genres in its roster now and is moving towards textbooks. With a stock of 300,000-400,000 units in its inventory, which moves every three-four months, BookChor is looking for a second warehouse in the south to supplement the one they have in Sonepat, Haryana, to improve delivery services. So far, the company trades only in English-language titles, but it is planning to branch out into the regional languages. Its revenue, year-on-year, is Rs4-5 crore, says Alok. 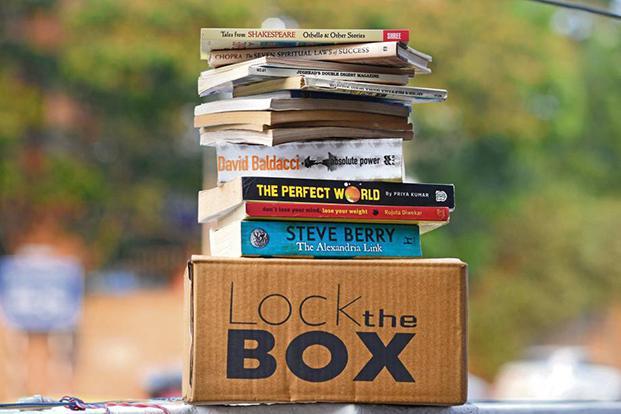 That may seem like an impressive turnover for a business involving used products, but the excited gathering at the community function hall, where the sale was organized, did look no less so. Admittedly, Bengaluru reads the most, ahead of Delhi and Mumbai, according to Amazon India’s “Annual Reading Trends Reports For 2017”, but the response to BookChor’s sales in other cities like Pune has also been encouraging, averaging 10,000 visitors a day. With a cleverly packaged theme like “Lock the Box”, the apprehension of hype winning over enthusiasm is genuine though.

“I came looking for crime and science fiction fantasy but there’s not much of either,” said B. Suresh, a BCom student. Going by the rate at which visitors stuffed books into their box, or sat in corners or on stairways to debate which ones to take and which to discard, the better ones seemed to have been vanishing off the shelves since earlier in the day. A young girl was dragged away reluctantly from a heap of Fifty Shades Of Grey, while, in the children’s section (an entire room was dedicated to it), parents fought over books for their wards.

Hunting among used books always throws up treasures. Making my way around with an Odysseus Box, I came across curiosities like Beating Your Heart: The Lifestyle Of A Survivor by Richard Adler, and Hugh Rippon’s Discovering English Fold Dance. A special edition of Mark Haddon’s best-selling novel The Curious Incident Of The Dog In The Night-time, one of the 40,000 copies published to mark World Book Night, a public reading project, in 2011, lay around. The most heartfelt find for me perhaps was a copy of Daphne du Maurier’s Rebecca, with the inscription: To Juliette, this book excels anything we ever read. Love, Mama 1991. I haven’t stopped thinking why—or how—Juliette parted with such a precious gift.livemint

Leader Pat Fry, former President and CEO of Sutter Health, Joins CitiusTech’s Board of Directors
CELEBRATING THE CHOSEN FEW
One year of Ayushman Bharat, A overview