New Delhi: India’s ranking in the World Bank ease of doing business survey for 2018 climbed a record 30 notches to 100 as a range of regulatory and policy reforms put in place by the Union and state governments over the past four years started delivering results. Significantly, this year’s report from the World Bank has
By News Desk Wed, 1 Nov 2017

New Delhi: India’s ranking in the World Bank ease of doing business survey for 2018 climbed a record 30 notches to 100 as a range of regulatory and policy reforms put in place by the Union and state governments over the past four years started delivering results.

Significantly, this year’s report from the World Bank has been titled Reforming to Create Jobs.

Not only does the jump in doing business rankings burnish the reformist credentials of the Prime Minister Narendra Modi-led National Democratic Alliance (NDA), which has undertaken tax reforms, reducing government oversight by stepping up disintermediation and anti-corruption policies, it also signals that change in the economic narrative is gaining momentum. 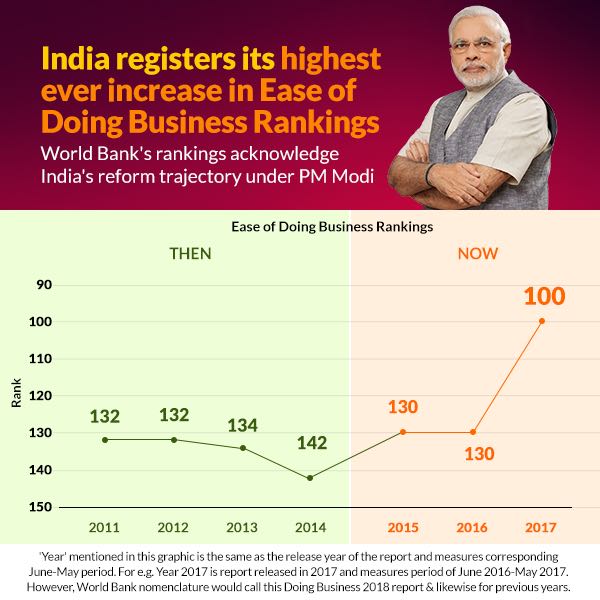 Finance minister Arun Jaitley signalled as much while addressing a press conference on Tuesday evening. “Indirect tax reform (goods and services tax) had become law by June, but was implemented from July. We will get credit for it in future rankings,” he said and then added, “Evaluation for the ease of doing business ranking is very tough. The ranking does not reflect the reform measures unless the outcome is visible on the ground.”

The NDA, which has been seeking an improvement in India’s ranking to attract greater foreign investment, has set more ambitious targets for itself. According to an output-outcome framework document prepared by the government, India is seeking to reach the 90th rank in 2017-18 and 30th by 2020. Last year, India’s ranking improved by just one notch to 130 out of 190 countries. The Doing Business 2018 report, which bases the rankings on field surveys and interviews with corporate lawyers and company executives in Delhi and Mumbai, also recognized India as one of the top five reformers in this year’s assessment. The country improved its ranking on six out of the 10 parameters used to measure the ease of doing business, becoming the only large economy to do so.

Of the 10 parameters, India got its highest ranking on “protecting minority investors” by rising to the fourth position globally from 13th last year as the country’s corporate law and securities regulations were recognized to be highly advanced. Its worst performance came in “dealing with construction permits” despite improving its ranking to 181 from the 185th position last year.

Jaitley said the target of making it to the top 50 countries in the Doing Business ranking now seems doable. “In parameters such as doing business, dealing with construction permits, enforcing contracts and registering property where India is still lagging behind, there is reason to believe that we can improve our position significantly,” he added.

Nilaya Varma, a partner at KPMG India, said the next paradigm shift to the top 50 is still a long way ahead and will require India to maintain strong momentum. “There is a need to continue to work on other areas including starting a business, trading across borders as well as land reforms,” he said.

On the “distance to frontier” metric, which measures the absolute improvement in the performance of a country against better-performing countries, India scored 60.76 against 56.05 last year, indicating that “the country is continuing its steady shift towards best practice in business regulation”.

“It indicates India’s endeavour to further strengthen its position as a preferred place to do business globally,” said Annette Dixon, the World Bank’s vice-president for the South Asia region.

The World Bank said while there has been substantial progress, India still lags in areas such as starting a business (156), enforcing contracts (164) and dealing with construction permits (181).