Mumbai: The spike in Brent crude prices could cause a major headwind for Indian markets and upset the country’s macroeconomic balance in financial year 2019. Oil rose above $75 a barrel on Tuesday to its highest since November 2014, supported by production cuts led by the Organization of the Petroleum Exporting Countries (Opec), strong demand and
By News Desk Wed, 25 Apr 2018

Mumbai: The spike in Brent crude prices could cause a major headwind for Indian markets and upset the country’s macroeconomic balance in financial year 2019.

Oil rose above $75 a barrel on Tuesday to its highest since November 2014, supported by production cuts led by the Organization of the Petroleum Exporting Countries (Opec), strong demand and the prospect of renewed US sanctions on Iran.

Brent crude prices have surged 11.92% so far this year.

Analysts said rising crude prices may hurt the margins of Indian companies amid growing expectations of an earnings revival spurred by consumption in rural sectors.

According to Ravi Gopalakrishnan, head of equities at Canara Robeco Mutual Fund, the rise in crude prices will definitely impact the raw material supply chain of many manufacturing companies as India imports a major portion of its crude requirements.

“Also, metal prices have seen an upward push in the past few months. So, it will impact operating margins of companies as demand situation and economy is in such a shape that this extent of price rise can’t be absorbed. The companies may be able to pass on a little bit but not entirely,” he said.

Gopalakrishnan added that a meaningful recovery in both macro and corporate earnings is expected in the second half of this year, on consumption driven by a normal monsoon.

“So, some amount of the high crude price could be passed on to the consumer then,” he said.

ICICI Securities Ltd said in a note on 23 April that macro headwinds are rising for Indian equities in the form of rising commodity prices, especially oil, depreciating rupee, fiscal challenges, election-related uncertainty and upside risks to inflation, while improving GDP growth outlook and normal monsoons are providing the tailwinds, which could keep markets range-bound in the near term. 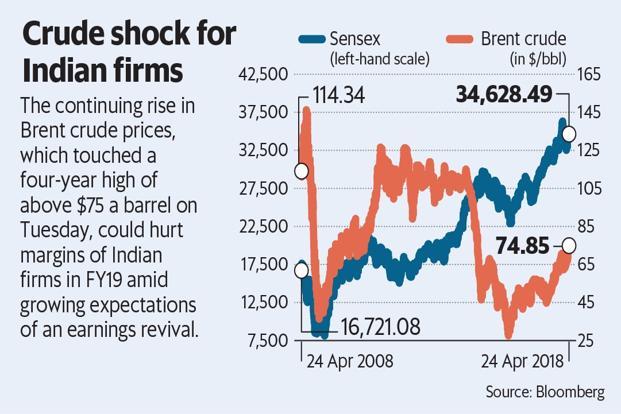 The brokerage firm said unless there is a surprise spike, a rising bond yield scenario is mostly factored in by global equity markets and the focus has shifted to earnings.

Sanjeev Zarbade, vice-president at Kotak Securities Ltd, believes the impact of increasing crude prices hurting the margins of Indian firms will be both direct and indirect.

“Consumers of crude oil or fuel either for running business or as a raw material will be hurt. Indirectly, there will additional burden of freight cost for some companies. In the long-term, it may impact the economy, while currently it is expected to hit operation cost of companies,” he said.

An increase in oil prices is likely to put pressure on fiscal and current account deficits in the year ahead as India imports more than 70% of its oil requirement.

The petroleum and natural gas ministry estimates India’s crude oil import bill may increase by 20% to $105 billion in this financial year from $88 billion in 2017-18.

The estimate assumes an average crude oil price of $65 per barrel for the year, about $9 a barrel less than the current rate.livemint