How the surge in oil prices affects India’s finances

The cost of the Indian basket of crude, which averaged $47.56 and $56.43 per barrel in FY17 and FY18, respectively, rose to an average of $69.30 in April 2018, according to data from the Petroleum Planning and Analysis Cell (PPAC). The price was $71.39 a barrel on 30 April. The Indian basket represents the average of Oman, Dubai and Brent crude.

Why are prices increasing?

The sharp spike in international crude oil prices is due to a combination of factors such as Opec and Russia cutting supplies, falling production in Venezuela and geopolitical tensions. Retail prices of petrol and diesel in India track the global prices of these auto fuels, not crude, although they are broadly linked to crude oil price trends, which have firmed up.

What is the immediate fallout in India?

The worry over crude oil prices stems from India’s energy needs being primarily met through imports. Diesel prices on 24 April reached Rs65.93 per litre in Delhi, a record high. Petrol prices also rose to Rs74.63 per litre on 24 April, the highest since they were raised to Rs76.06 per litre on 14 September 2013. This has raised the pitch for central and state governments to cut taxes on petrol and diesel. Retail prices have remained unchanged since 24 April. 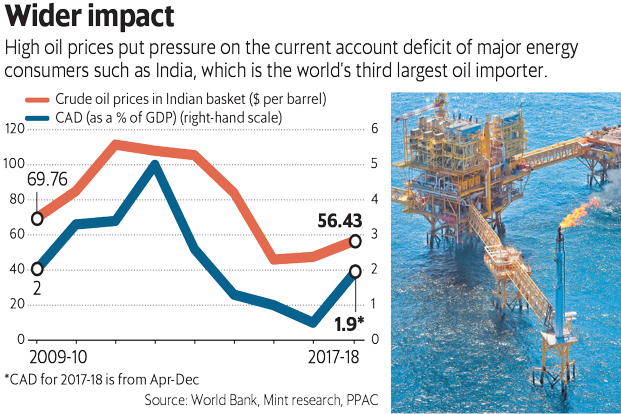 How will this impact public finances?

Oil imports rose by over 25% in FY18 to $109 billion from a year ago. Elevated oil prices could adversely impact India’s trade deficit and consequently, the current account deficit, which stood at 1.9% of GDP in the April-December period of FY18. High oil prices could also put pressure on the margins of oil marketing companies and depress their dividend payments to the government as well as their corporate tax outgo. Also, any reduction in excise duty on auto fuel ahead of the 2019 general election may impact the central government’s revenue receipts.

What has India’s response been?

The government has ruled out an immediate rethink on free market pricing and has maintained that its goal is to maintain fiscal balance, with overall budgetary strategy and consumers’ interest having equal weightage. India has also been seeking reasonable rates as its energy demand grows, with New Delhi proposing a consumers’ collective comprising major energy buyers—China, India, Japan and South Korea.

Will such an arrangement work?

Experts believe it might, with India’s energy demand expected to grow at 4.2% over the next 25 years. This has prompted global majors such as Saudi Aramco, the world’s biggest oil producer, to invest in India for ensuring offtake security. “Many Asian countries will remain significant importers of energy for decades to come. Their collaboration will bode well for exchanging good practices including dealing with exigencies on price, logistics and such other fronts,” said Deepak Mahurkar, director (oil and gas industry practice) at PwC India.livemint