Credit growth improved in FY18 – who did it benefit?

The good news first. After a lacklustre performance in FY17, the banking system’s credit growth revived in FY18. However, not all is well. Addition to the deposit base is happening at a slower pace compared to the growth in credit, leading to an increased credit/deposits (C/D) ratio. In fact, the incremental C/D ratio has reached
By News Desk Mon, 18 Jun 2018

The good news first. After a lacklustre performance in FY17, the banking system’s credit growth revived in FY18. However, not all is well. Addition to the deposit base is happening at a slower pace compared to the growth in credit, leading to an increased credit/deposits (C/D) ratio. In fact, the incremental C/D ratio has reached an alarming level. The numbers speak for themselves, something policymakers will keep in mind when they fine tune their action plan in the months ahead. The abysmal growth in deposits reflects the unattractive real interest rates in a rising inflation environment. To get savers to park more of their money in banks, deposit rates need to be raised.

The high C/D ratio, besides mirroring interest rate pressures, also highlights a structural shift in the banking system. Theoretically, public sector banks dominate the system with their absolute market share in system’s credit and deposits at 65 percent and 72 percent respectively in FY18. However, their incremental market share in credit and deposits have fallen to 16.5 percent and 26 percent respectively. With the lion’s share of incremental business going to private sector players, their very high incremental C/D ratio (at 95 percent) will influence systemic interest rates.

However, it is worth noting that the incremental market share of private sector banks in deposits has been rising from 41 percent two years back to 55 percent now. In short, for every additional Rs 100 of deposits in the banking system, Rs 55 is attracted by the 15 private banks and Rs 45 goes to the 21 PSBs (public sector banks).

In the credit market, the PSBs have incremental market share of 17 percent, an unmistakeable sign that the asset quality mess is hurting their ability to expand their business.

So which banks are ahead in the race for deposits?

No, it is not the large PSU banks. Contrary to the popular perception that Indians trust PSU banks with their hard earned money, private banks have been gaining handsomely. 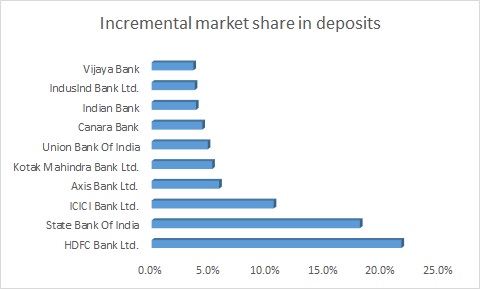 These top ten banks command nearly 82% of the market within which over 57% is controlled by private sector banks. Only two out of twenty one PSU banks have incremental market share in deposits which is higher than their absolute market share. For private banks, the relatively smaller base coupled with aggressive market share gains has resulted in quite a contrasting picture with ten out of the fifteen listed private banks having significantly higher incremental market share in deposits which will translate into higher absolute share going forward.

In advances too, private players have upped the ante and shifted market share in their favour meaningfully. 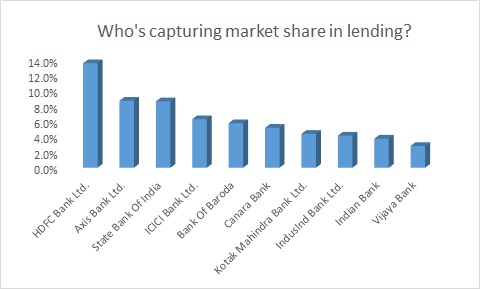 As evident, the tide has turned in favour of private banks. Note that for seven private sector banks, namely HDFC Bank, Axis Bank, IndusInd Bank, Kotak Mahindra Bank, DCB Bank, RBL Bank and Federal Bank there has been significantly higher growth in incremental share in advances as well. This indicates strong market share gains which will reflect in higher absolute market share as well in future. In the PSU pack, meaningful market share gains were visible in Indian Bank and Vijaya Bank. Two large banks – Canara Bank and Bank of Baroda also delivered a decent show in terms of maintaining their market share in FY18.

Are the PCA banks on the mend?

Implications for macro and investmentsThe high C/D ratio of key players in the market, mostly private sector banks, will push interest rates higher in the short term till deposits growth catches up. The shift in balance of power from public banks to private appears irreversible. Given chronic shortage of capital, PSU banks will struggle to get back into the game. Shares of private banks appear expensive, but their market share gains appear to justify the premium. For well-capitalised private sector banks with a strong corporate clientele, things can only get better once the asset quality pains abate.moneycontrol