Mumbai: Telecom tower infrastructure provider Bharti Infratel, which has witnessed tenancy losses due to consolidation in the telecom sector, expects better business in the future as telcos continue to roll out 4G telecom networks and prepare for 5G services, top company officials said.

“With improving industry structure, rising consumer demand, and the need to expand 4G network in the short-term and potentially 5G in the longer term, we expect the (tower) industry to come out of the current phase (of slow growth) much more stronger,” Bharti Infratel chairman Akhil Gupta told analysts in a post-earning call.

“With data demand growing at a very rapid pace, it is clear that all private operators have to invest heavily on network throughout the country to remain competitive,” Gupta said.

“In addition, in the longer term, the advent of 5G would significantly increase the demand for sites because of the spectrum being in higher frequency,” Gupta added.

The tower arm of Bharti Airtel, Bharti Infratel on Monday reported a 2% rise in consolidated net profit at Rs606 crore for the March quarter against Rs597 crore a year ago.

However, it also lost 22,134 co-locations during the year due to consolidation. Co-locations are points where a tower operator deploys antennae of multiple carriers. 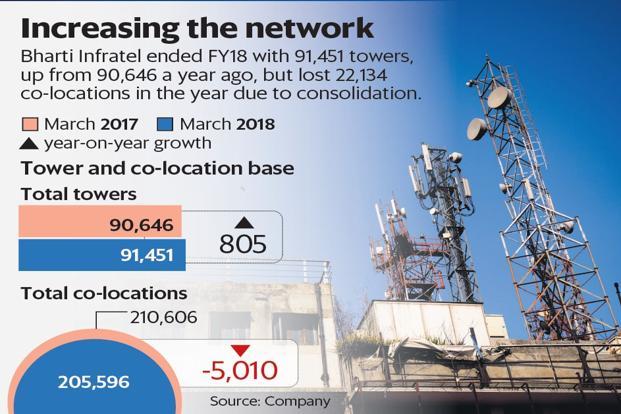 The revenue decline of Bharti Infratel will be driven by the exit of select players (RCom, TTSL and Aircel), said IDFC Securities Telecom Research dated 3 April. “This is likely to drive increase in churn and overall gross adds for the quarter are unlikely to offset this drag,” it said.

However, Bharti Infratel managing director and chief executive Devender Singh Rawat told analysts that he doesn’t agree that there is excess of supply in the tower industry.

“With Reliance Jio’s announcement of 210,000 towers, it is clearly showing that new normal for an operator, who is trying to compete in the (market) post consolidation, is north of 200,000 towers,” Rawat said, adding, “This clearly means that there is further requirement of rolling out new towers as we go forward.”

Rawat added that the tower industry is still to see much growth coming from areas with weak coverage.

Bharti Infratel expects average revenue per tenant, which has been stagnant for a few quarters, to increase after the Vodafone-Idea Cellular merger goes through.

“They (Vodafone/Idea) haven’t discussed with us on their exit,” Devender Singh Rawat told analysts. “We will look to engage with them after they get DoT approval for the merger.”

Uninor, which is waiting for integration with Airtel, is also yet to cancel its tenancy with Bharti Infratel, Rawat addd.

“Indus-Infratel merger remains a potential and is always a possibility,” said Bharti Infratel chairman Gupta said adding, “But it’s a shareholders’ matter and we are not in a position to comment much on this.”

Mint had on 23 February reported that Bharti Infratel and Indus Towers are planning to merge their businesses, citing three people aware of the matter.

Meanwhile, growth triggers for Bharti Infratel include the merged entity of Vodafone and Idea Cellular increasing tenancy, and Reliance Jio rolling out services.

“Jio has completed their earlier phase of growth at the end of the second quarter and are planning for the next phase of growth and rollout, and we are hoping to get a fair share of business,” Rawat said.livemint